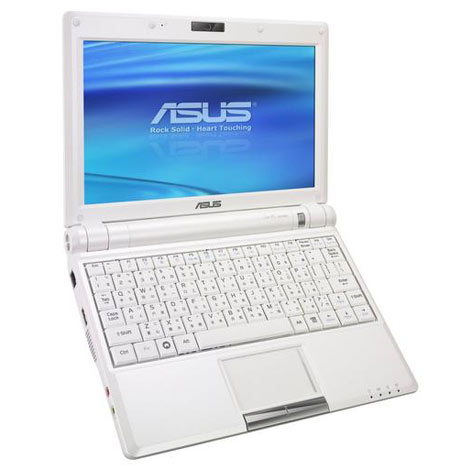 Asus’ Eee PC with a wider 8.9-inch display was rumored a lot. However, now Asus has officially launched the new Eee PC which is called Eee PC 900. The new version of the Eee PC will feature an 8.9 inch widescreen and a 1.3MP webcam. Even the storage capacity has been increased to up to 12GB and 20GB.

The Eee PC 900 weighs even less than 1kg and includes built-in Solid State Disk (SSD) technology offering a quiet, energy saving and shock proof design for stable computing. The screen features a resolution of 1024 x 600 pixels that allows users to view single A4 size page without the need to scroll left or right.

“Vital feedback from a wide variety of users have been received, which has spurred us on to create more options to cater to different user requirements,” said Jerry Shen, CEO of ASUS.

The new Eee PC also incorporates FingerGlide feature that makes operating the system easy and convenient. Users can easily zoom in and out of pictures with two simple finger movements on the touchpad. They can even scroll up and down for easier document viewing with the FingerGlide feature.

“Due to its lightweight stature, most users will place the Eee PC on their laps or hold them in their hands during use. With the addition of the FingerGlide feature, users will find it even more convenient to use the Eee PC,” added Shen.

Besides, the new Eee PC will come in both Microsoft Windows and Linux versions.

Asus has not revealed pricing and availability details of the Eee PC 900 as of now.