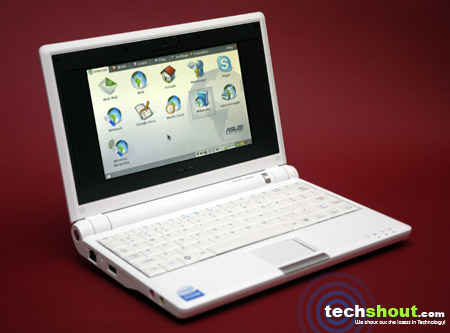 Technophiles all over the world are excited these days as a new kind of computer has invaded the markets. The eighties saw the explosion of personal computers while the mid-nineties saw millions of consumers picking up laptops and notebooks. However, as time evolved, there was a need for smaller laptops that could do lots of tasks together and therefore have more power.

But alternately, there was a growing set of people who wanted small, cheaper notebooks that would just let them do simple tasks, such as browsing the web and web processing. Asus was one of the early birds to identify this and came out with the Eee PC (pronounced as the letter e). The three E’s stand for, ‘Easy to learn, Easy to work, Easy to play’. True to the slogan, the sub-notebook is very easy to operate.

The one that we will focus on is the Asus Eee PC 4G from Asus. Let’s start with the specifications. The netbook comes with a 4GB solid state drive (I am sure you can make it out from the name) and is powered by 512 MB (DDR2) RAM. It has a 900 MHz Intel Celeron-M ULV 353 processor, which is apt for net surfing as well as applications from a productivity suite. 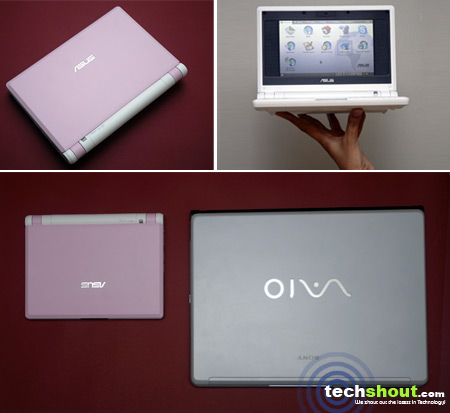 Coming to the design of the Asus Eee PC 4G Review, it is a small device, smaller than your average notebook. There is a memory card slot as well as three USB ports, two on the right side, one on the left. There is also a LAN Port and an optional modem port on the left. The 0.3 megapixel camera has been embedded on the top side, just above the screen, just the way you would find it on other laptops that are available in the market. The speakers are situated next to the screen. As for the power switch, it is placed on the fold that separates the top and the bottom side. The headphone and microphone jack can be found on the left side. A memory card reader is also included. The mic is situated at the bottom of the Eee PC.

The keyboard of the notebook is small and users with big nostrils fingers might feel a little uncomfortable while using it. But that said, the keyboard of the netbook adds great functionality and besides the usual control, alternate and home keys, there is also a function (Fn) key that makes it easy for the user to carry out tasks like adjusting the volume when listening to music or watching a video. Even the brightness can be regulated or the task manager can be called upon with the Fn key.

One of the most important things for any computer is the operating system and the user interface. Asus has made use of open source software as the Eee PC runs on a base Linux system. It employs IceWM as the default window manager and has a custom tab-based interface. There are six tabs altogether – Internet, Work, Learn, Play, Settings and Favorites. The names are self explanatory. But still let’s have a look at each of them.

The Internet tab would be the most important for users who are buying the Asus Eee PC 4G for surfing the net. It has all the tools that one would need to venture out on the internet. For browsing, you have Mozilla Firefox. If you want to chat, there is Pidgin IM that supports most of the major protocols and if you feel like making a call using VoIP, then there is Skype. Besides these tools, there are icons for various web-based utilities like iGoogle and Wikipedia.

The second tab, Work! Since Asus was kind enough to pack in OpenOffice, most of the tasks become quite easy. If you are familiar with the productivity suite, then it would be very easy for you to make use of the applications. Even if you previously only used Windows based productivity suites, you would be able to easily use it as OpenOffice is quite similar. There is also a PDF reader as well as a dictionary.

As for the rest of the tabs, there is a Learn Tab, which has some apps that are decent while the Play Tab takes you to multimedia options as well as the games. The games are not your hardcore games, but casual games that are well suited for the targeted users of Asus EeePC. The Settings Tab, as the name says, allows you to change the settings, something akin of a control panel. The Favorite Tab lets you put all your favorite apps. This is useful since it does not have a proper desktop.

The Asus Eee PC 4G is a boon for people who consider themselves novice in the vertical of technology. It is true, though some people are at ease when making use of computers and gadgets, some are just left dumbfounded! Asus has made sure that even the novices would be at ease using the Eee PC. Setting and changing Network settings is a simple task. One thing that has to be commended is that they have included Wi-Fi in the device. In fact, the whole user interface is uncomplicated. And yes, you can install Windows XP on the sub-notebook.

Though we had a nice time using the Eee PC, there are a few things that we did not enjoy. First up, there is no internal disc reader. Though you can buy a separate one, you will have to shell out more for it. Secondly, the screen size can get to you if you are surfing for a longer time. They should have made a larger display, maybe 800×600 pixels.

Our Shout: Concluding the Asus Eee PC 4G Review review, we are giving the mini-laptop a rating of 8/10. It costs Rs. 18,000 and is worth every penny. The sub-notebook is recommended for novice users who don’t want to spend a bomb on a PC or a laptop as the Eee PC has all the tools for basic activities like surfing the web and other daily tasks.