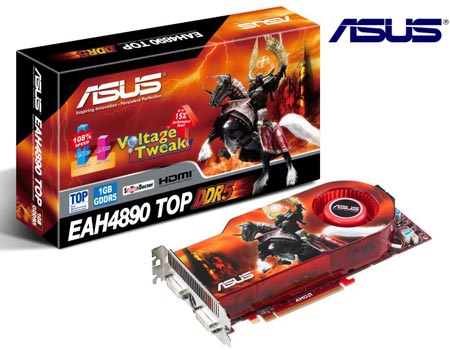 A few days back Asus unveiled the world’s first graphic cards that equip the powerful Voltage Tweak technology. Called as the Asus EAH4890, the new graphic cards series should excite gamers in particular as it is designed to boost GPU voltages along with nearly 15% improved performance.

Offering astounding graphical performances, the new Asus graphic cards series is incorporated with the SmartDoctor application. Delivering up to 15% in performance improvement, the application also offers the most powerful overclockability. The overclocking utility allows the series to provide high voltage boots along with performance upgrades.

With few simple clicks the utility eliminates the need of a separate overclocking button. It also removes the trouble of re-flashing the BIOS which could damage the cards. Another unique feature of this series is the inclusion of the ATI Stream technology that delivers enhanced balanced platforms that have the ability to run demanding computing tasks. Based on the AMD graphics processors, the series comes with a huge parallel processing power.

“Gaming has been the segment which has made the graphics card industry more challenging and has helped to raise the performance bar for graphics cards. At Asus we take pleasure in providing state of art technology that evolves with every new chipset.” explained Mr. Vinay Shetty – Country Head – Component Product, Asus (India) on the launch of this latest graphics card from Asus.

He further mentioned, “By launching the EAH 4890, Asus offers a unique Voltage Tweak technology which raises GPU voltages from 1.312V to 1.4V in Asus EAH4890/HTDI/1GD5, allowing GPU and memory clock performances to be boosted from 850MHz to 950MHz and 3900MHz to 4600MHz respectively

There is no word on the price or availability of the Asus EAH4890 graphic cards series.