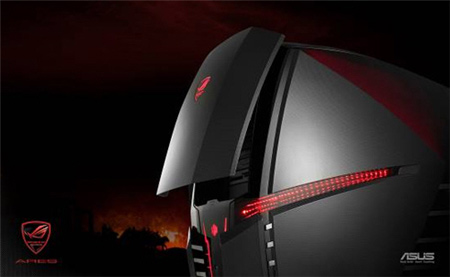 Asus has unveiled a new ARES CG6155 gaming desktop. The new desktop possesses stylish look. Talking about its design, Asus says that “unique exterior design is inspired by ancient and modern armor with both Eastern and Western influences, and presents an aesthetic appeal that exudes pure power!”

The Asus gaming desktop is equipped with advanced quad-core CPU, 3-way SLI graphic cards and extreme factory over-clocking that boosts CPU performance by up to 33%. Also advanced technologies such as Blu-ray optical disc drive, high-definition audio and DDRIII memory are incorporated with the desktop.

The Asus’ new gaming desktop will be preloaded with Microsoft Vista Ultimate. Peripherals such as gaming keyboard, mouse, mousepad, headset will come along with the CG6155. However, as of now the pricing and availability details have not been disclosed.