Asus Android Wear smartwatch to be showcased on September 3

Asus knows that Android Wear is an exciting idea, but owing the high price tags of such LG and Samsung products, few have been able to experience it till now. The company hopes to come to the rescue of fans wishing for cheaper alternatives by unveiling an inexpensive smartwatch that is most likely to make its debut on September 3.

The period during next month’s IFA is going to be jam-packed with thrilling announcements, with products like the Galaxy Note 4, the Moto X+1, the Moto G successor, the Moto 360, the Xperia Z3 range and more having been scheduled for a reveal at that time. And now, there’s the addition of Asus’ Android Wear smartwatch to that list. 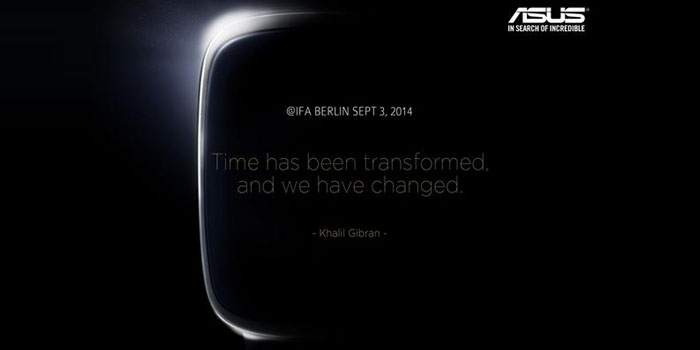 We had first heard about the Asus Android Wear smartwatch back in June this year, and now Asus has decided to talk about it finally. Using Twitter, a teaser image has been released by it, probably giving us a first look at the outline of this smartwatch.

This image confirms that the Asus Android Wear smartwatch won’t have a round form factor like that of the Moto 360’s. But it doesn’t exactly have a rectangular one either. If its slightly arched edges are anything to go by, we’re certainly in for a completely fresh looking Android Wear device at this year’s IFA.

Something #Incredible is going to happen at #IFA2014, see you there! pic.twitter.com/1Dr2zAo06I

This picture also features a Khalil Gibran quote which goes, ‘Time has been transformed and we have changed.’ In case, you didn’t get the allusion, reading time is one of the functions a smartwatch can be used for, if one is so inclined.

Rumor has it that this upcoming Android Wear gadget from Asus will be seen retailing at around $149 which is extremely cheap considering that the LG G Watch and the Samsung Gear Live go for $229, while the Moto 360 is expected to be priced at $249.