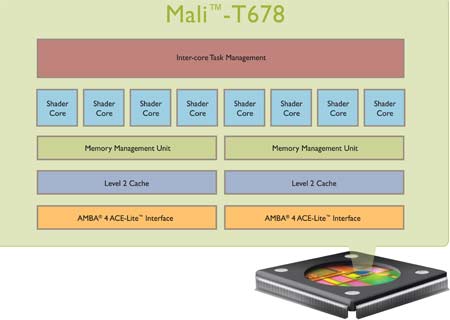 A certain UK based semiconductor chip maker has announced the arrival of its second generation graphics units, dubbed the ARM Mali-T600 series. These newly unveiled modules boast of a 50% increase in performance compared to the previous generation GPUs.

The series basically comprises of three versions, namely Mali-T624, Mali-T628 and Mali-T678. The GPUs are based on the Mali Midgard architecture. The former two are aimed towards smartphones and smart TVs, while the latter one is the highest performance unit currently available proffering ALU support and energy-efficient as well as high-end visual computing for the tablet segment. The T624 GPU comes with one to four cores and the T628 with one to eight cores.

“People expect higher standards of visual computing on their smartphones, tablets and smart-TVs with seamless access to their digital world and personal content,” expressed Pete Hutton, General Manager, Media Processing Division, ARM. “GPU compute enables this as it increases the range of functions mobile devices can perform within the available battery life. ARM continues to focus on system-wide optimization by integrating market leading CPU and GPU technologies to drive both high performance and energy-efficiency.” 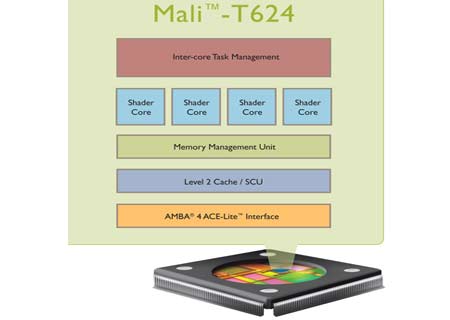 According to the company, these units are the first to adopt the Adaptive Scalable Texture Compression (ASTC). This apparently aims at increasing battery life by optimizing the performance while maintaining an always-on state. All the aforementioned GPUs are designed to support OpenGL ES 1.1, 2.0 and 3.0 standards as well as DirectX 11 FL 9_3, DirectX 11 and OpenCL 1.1.