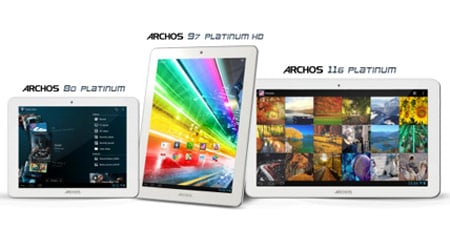 The Archos 116 Platinum, along with the 97 HD and the 80, has been announced with each getting a price and a broad release date pinned down. All come with a sleek aluminum design and Jelly Bean as the operating platform, in addition to quad core CPUs and high-definition IPS display panels. The company last spun its head toward us with its Titanium series, also containing multiple devices.

Let’s start with the 97 Platinum HD, which shares a few features with the rest of the tablets in the new line. To kick off, these ‘communal’ traits include the Android 4.1 OS, high-resolution IPS displays with capacitive multi-touch and 1.2GHz quad core processors with 8-core PowerVR SGX544 GPUs. Another commonality within the series is the inclusion of mini HDMI and microSD ports to extend viewing experience and storage correspondingly. Each device further has both front and back cameras as well as 2GB of RAM. 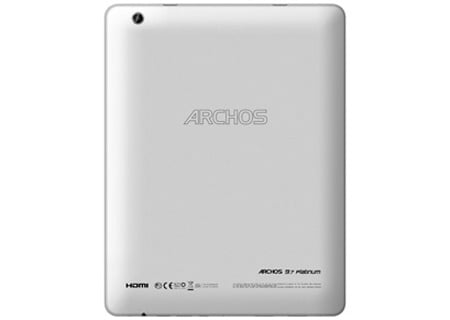 The slab in question gets a 9.7-inch, 2048 x 1536 pixel screen, the reason for the HD in its name. Powering the device is a lithium-polymer battery whose capacity hasn’t been mentioned, while on the back is a 2MP camera with auto focus. Wi-Fi has been built in and the tablet can act as a USB host via OTG technology. It is possible to expand the 8GB ROM by up to 64GB using microSD cards. The slab can play H.264 HD and MPEG-42 HD video at 1080p at 30fps.

Now the model 80 comes with an 8-inch screen capable of a 1024 x 768 pixel resolution and shares most other features with the above slate including camera, connectivity and video playback, but weighs just 480 grams to the above slab’s 670 grams. And finally, the biggest 116 version sports an 11.6-inch display, although it doesn’t have the highest resolution in the series, instead settling for standard HD 1920 x 1080 pixel real estate. Unfortunately, that’s all that has been made known of the slate leading the line. 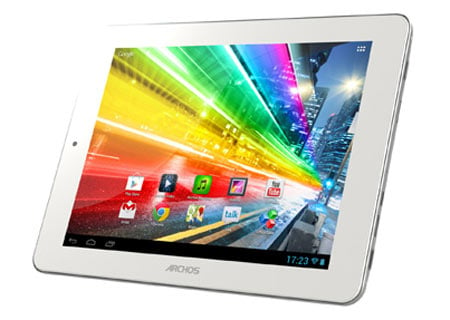 The Archos 97 Platinum HD is scheduled for a release sometime this month for $299, while the 8-inch model will also go on sale in February, but will carry a tag of $199. The device labeled the 116 is expected to touch down later in April for $349. In the meantime, the company will make its presence felt at CeBIT 2013 in Hanover running from the 5th to the 9th of March.