Archos GamePad is a blend of Xperia Play, PS Vita 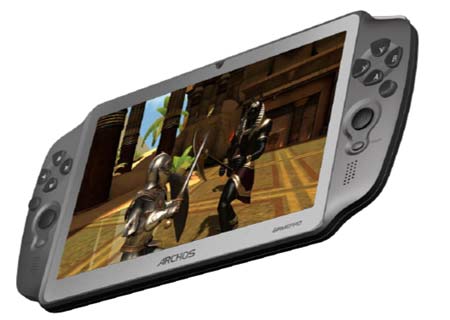 With the announcement of the Archos GamePad, the company has started catering to a new segment of mobile devices apart from professional and educational needs. This latest gizmo is a handheld rig with an aim to deliver a rich gaming experience through the Android platform, much like the Ouya console and the Wikipad tablet.

So let’s see what this piece of hardware packs in – For visuals, a tablet-sized 7-inch capacitive touchscreen is situated on the front. Well, there’s no concrete information if we’re going to be treated to HD visuals or not. But rest assure, the company won’t miss out on the gaming aspects. A bunch of physical controls including the conventional directional buttons and command keys (X, Y, A and B), and analog sticks are placed on the sides.

“When Android 4.0, Ice Cream Sandwich, was first released they included game controller support within the framework and that is when we decided to build the GamePad,” comments Henri Crohas, Archos Founder and CEO. “Thanks to the mapping and automatic game recognition systems included on the GamePad, we already have over a thousand android games compatible with the Archos GamePad’s physical controls, including back catalog titles that originally didn’t include physical controls.

The best part is yet to come – the device arrives with access to a wide catalog of games and application available through Google Play. Complementing this is a 1.5GHz dual core processor clubbed together with Mali 400mp quad-core graphics. And to boost compatibility with a host of titles, the slate is bundled with automatic game recognition and mapping tools.

The Archos GamePad price is likely to fall below the €150 mark, while its release date is scheduled for the end of October.