Archos 70b internet tablet packs in Honeycomb for under $200 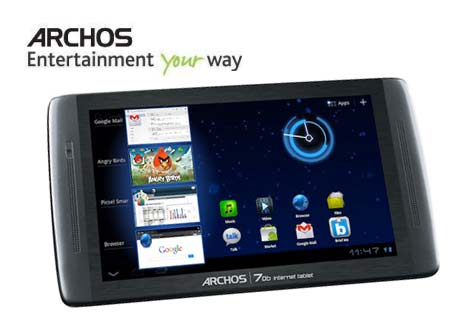 Stated to be an updated version of the previously launched Archos 70 IT Gen 8, the Archos 70b internet tablet is scheduled to make its way to the UK and the U.S. next year. The newly launched device comes powered by the Android Honeycomb OS and will be available for just under $200.

In comparison to its predecessor, the 70b internet tablet sports an enhanced capacitive multi-touch screen that portrays a resolution of 1024 x 600 pixels along with a much more powerful processor that is clocked at a frequency of 1.2GHz. Complimenting the upgraded hardware components is the 512MB of RAM through which users should be able multitask more efficiently and expect a faster web browsing experience. Well, these aren’t all – the device also employs a 3D graphics accelerator, Wi‐Fi connectivity, an HDMI port for viewing content on an external display and a microSD card slot.

Since the gadget runs on the Android 3.2 OS, users will have access to over 300,000 apps covering games, eBooks, news, eMagazines and many others that are optimized for large displays. Additionally, the interface provides an intuitive way of navigation through all homescreens as well as better transitions for switching between applications. For a richer multimedia experience, the company has introduced upgraded versions of its Archos apps for video and music.

The Archos 70b internet tablet price tag read as $199 for the U.S. and £179.99 for the UK. The device is anticipated to be made available through stores in the U.S. starting January, 2012. No official shipping dates for the UK have been provided by the company as of now.