Archos 48 Platinum price leaked, two other smartphones on the cards

The 48 Platinum quad core smartphone by Archos as well as two other handsets dubbed Carbon 35 and 52 Titanium have been leaked and the devices that may be gearing up to debut at the MWC 2013 will be available for as low a starting price as €90. It will be the first time when the French manufacturer of budget-friendly tablets will foray into the phone segment.

Apart from the 48 Platinum and the other phones, Liliputing who spotted them at MiniMachines, also reported about the 116 tablet which has already gone official. The smartphone in question is supposed to be a high-end device featuring a quad core processor to ensure smooth internal working. This MediaTek MT6589 ARM Cortex A9 chipset is said to be capable of clocking in a maximum speed of 1.7GHz. Also, as the name suggests, its front panel will be graced by a 4.8-inch multi-touch display that can render visuals in 1280 x 800p resolution. 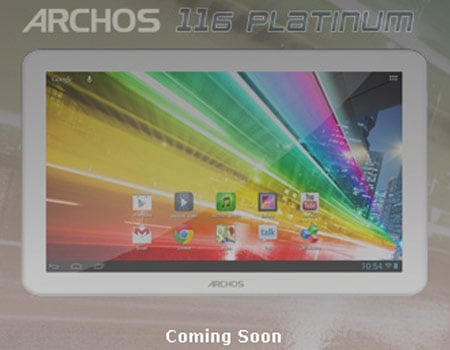 Next up is the entry-level Carbon 35 that should offer decent mid-range features without breaking the bank. The smallest of all, this device gains multitasking properties from a single core processor which is accompanied by 512MB of RAM. Users can expect 512MB of internal storage and hopefully it is expandable using a microSD card. The 3.5-inch touchscreen can deliver pictures in 480 x 320p resolution.

And as far as the 52 Titanium is concerned, although it flaunts the biggest display amongst all of these devices, it does not boast of high-end specifications. Nevertheless, it will be powered by a dual core processor ticking at 1.2GHz and will employ a display of 800 x 480p resolution, measuring 5.2 inches.

The 48 Platinum and Carbon 35 by Archos will be up for grabs for €249 and €90, respectively. Availability details of the 52 Platinum are not known. But the company is yet to issue an official statement for confirming these devices.