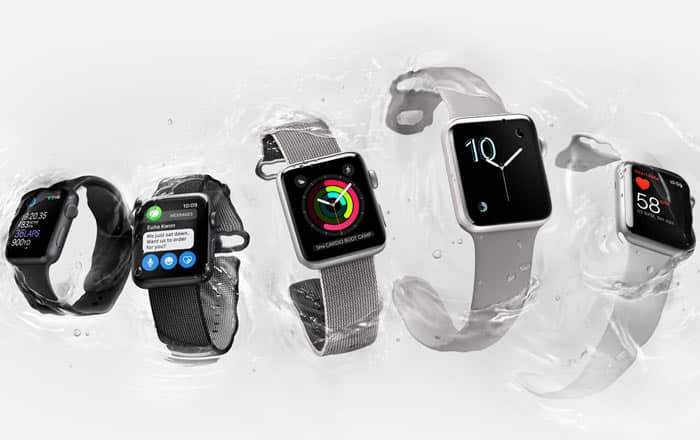 Apple’s major event for the iPhone 7 also saw the release of its next-generation Apple Watch Series 2. The first iteration of the smartwatch was launched nearly two years ago, making the new edition long overdue.

For those hoping for a major top-to-bottom design refresh, prepare to be disappointed as Apple has largely stuck to the same look as before. Instead, the tech behemoth has chosen to upgrade the innards of the Apple Watch Series 2 in the form of things like water resistance and built-in GPS.

Apple claims the wearable can survive plunges up to 50m underwater. The company is so confident of the device’s abilities, it claims the smartwatch can be worn while swimming without having a meltdown. It’s even developed a new technology to keep water out of the speakers by using sound vibrations to force liquid out.

The other major headline-grabbing feature of the Watch Series 2 is its newfound GPS skills. To recall, the older model did not ship with the ability, forcing athletes to take their iPhone while running or cycling to record their distance and speed even when they’d prefer not to. The new version of the smartwatch does away with this inconvenience.

Apple’s also introduced a bunch of useful tools in watchOS 3 to make workouts easier like a heart rate sensor and coaching to keep users motivated. There are even special wheelchair-specific workouts which take into consideration different pushing techniques and terrains. Pokemon Go devotees will be pleased to know the app is coming to the gadget, allowing people to view surrounding Pokemon and stake out Pokestops.

Under the hood, the Watch Series 2 packs specs like a new-and-improved S2 dual-core processor which is supposedly 50% faster than its predecessor. Furthermore, it apparently supplies double the graphics power due to the inclusion of a new GPU. The company asserts the wearable’s display is 50% brighter as well at 1000 nits.

The Apple Watch Series 2 will be available for pre-orders in the US starting from September 9. Sales begin from September 16 in the US and October 7 in India starting at $369 or Rs 32900 for the aluminum sport model. Its price goes up to $1499 for the Hermes variant and $1299 or Rs 110900 for the ceramic Apple Watch Edition. The brand has also tied up with Nike to launch sporty-looking offerings starting at $369 or Rs 32900.