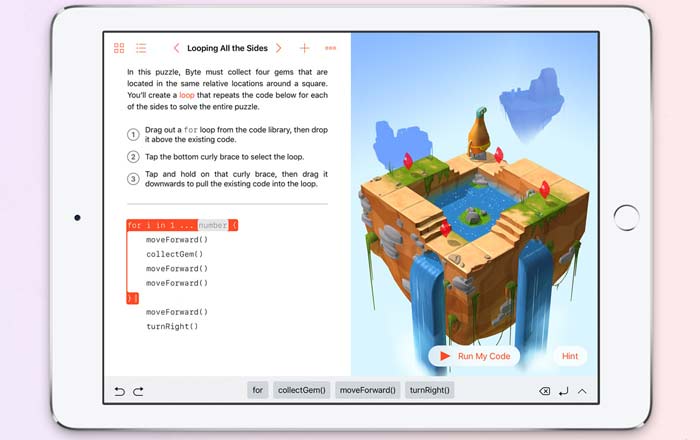 Towards the end of the WWDC conference, Apple CEO Tim Cook took the stage in order to announce Swift Playgrounds. This particular platform is actually an iPad app which has been squarely targeted towards helping kids learn how to code.

For those unaware, Swift is the programming language that’s used for writing apps for iOS, macOS, watchOS and tvOS. By teaching it to kids, Apple is seemingly hoping to get the next generation of its developers ready at an early age.

Swift Playgrouds has been targeted towards the iPad probably because it’s the most used iDevice by kids. The app itself comes with a very colorful and easy to understand user interface. It includes several games and animations to keep the children hooked.

Also Read: iOS 10 will let you delete all those stock iPhone apps you never use

Moreover, in order to make coding easier for kids, Apple has implemented a special keyboard as well. This one features a number of different shortcuts and other nifty traits for making the entry of code easier.

Apple introduced Swift Playgrounds at the same WWDC conference which saw the unveiling of iOS 10, macOS Sierra and watchOS 3.0. With iOS 10, Apple’s iPhones will get lockscreen notifications, whereas Siri will be opened up for developers to integrate their services with digital assistant.

macOS happens to be the new name for OS X, and its newest version is called Sierra. This version brings Siri to the desktop for the first time, and also features a number of distinct Continuity additions. As for watchOS 3.0, it gets several new features including the ability to load apps way faster than before.

Just like all these software platforms, Apple’s Swift Playgrounds app too will be made available for the public this fall. However, developer previews of all of them are available right now.