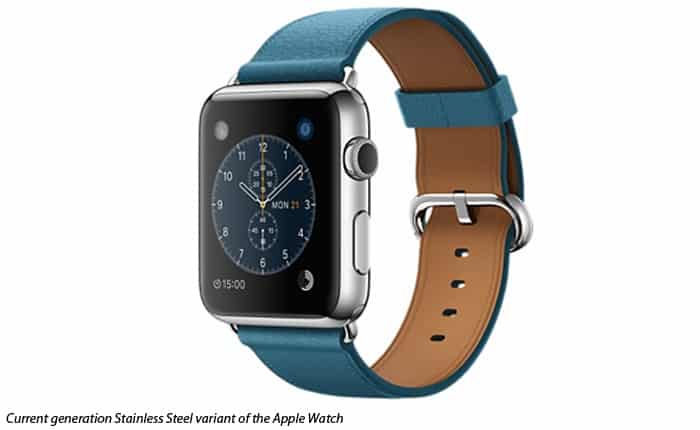 Apple is scheduled to release the Watch 2 in September 2016 with a number of improvements to the internals. The key changes in terms of software were revealed at the company’s developer conference earlier this month when iOS 10 and watchOS 3 were announced among other things. A recent story states that the OLED screen on the Apple Watch will be switched out for a micro LED display.

Don’t hold your breath yet – it’s slated to arrive with the 2017 version of the Apple Watch. The unofficial word on the street has already shot down hopes of the company launching the Watch 2 with revolutionary design updates. Sure, the user interface has been overhauled thanks to watchOS 3, and cellular connectivity as well as GPS support are expected. But the forthcoming device’s appearance is rumored to remain largely the same.

Back in 2014, Apple acquired LuxVue, a firm which was reportedly working on micro-LED and other secret screen technologies. Then in 2015, the iPhone maker set up an R&D facility in northern Taiwan, supposedly focused on developing advanced displays. Now DigiTimes claims the company is looking to replace the Watch’s OLED panel for a micro LED option, starting from the second half of 2017.

This timeline suggests that the Apple Watch 3 will use a micro LED screen, and not the 2016 Watch. The aforesaid displays are sized between 1-micron and 100-micron. They’re quite expensive and difficult to produce in large numbers, but are attractive because of the improved color range they can offer. Requiring no backlighting, they deliver higher image resolution and increased brightness.

Apple can make these micro-LED panels thinner and lighter than the OLED ones it presently uses in its Watch lineup. This means that the company will be able to shave down the size of the wearable’s body. And who doesn’t want a sleeker Watch on their wrist?