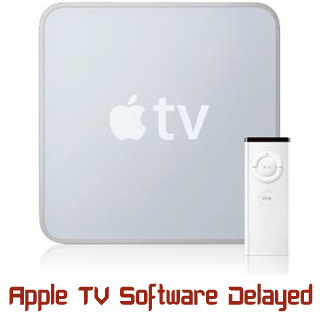 Apple seems to be in a mood to alternate good news with an upsetting one. Whilst the shipment of the MacBook Air is a piece of great news, your faces could probably drop on knowing that the company has decided to delay the much-awaited Apple TV update. The reason for the holdup in the availability of the service is that it has not yet been completed entirely.

Without elaborating much detail on the exact cause behind the delay, the Cupertino-based company revealed that the software is now slated for release in another week or two’s time. During his Macworld keynote speech, Apple honcho Steve Jobs revealed that the software would be ready by Jan-end. However things do not seem to have gone the way that they were supposed to.

With the Apple TV, users can transfer content from the computer to the television sans a computer. The Apple TV update will enable users to rent more than 1,000 movie titles, including more than 100 high-definition titles with 5.1 Dolby Digital surround sound, directly from the comfort of their living rooms. DVD-quality movies will be available on rental basis, $2.99 for older titles, and $3.99 for new ones. High-definition versions will cost a dollar more