Apple TV, with 40GB Hard Drive and Apple Remote being shipped by Apple 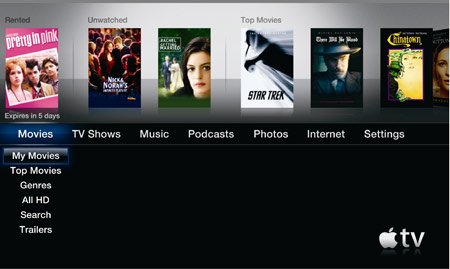 Apple has announced that it has now begun shipping Apple TV, a wireless device that allows you to play music, movies, photos and more on a widescreen TV.

According tp Philip Schiller, Apple’s senior vice president of Worldwide Product Marketing, “Apple TV is like a DVD player for the Internet age- providing an easy and fun way to play all your favorite iTunes content from your PC or Mac on your widescreen TV.”

Apple TV has a great new interface, and this enables users to browse and view their entire collection of digital media from a distance of around 30 feet using the simple and very intuitive Apple Remote. What is more, Apple TV connects to almost all modern widescreen televisions.

Apple TV works well with both Windows as well as Mac operating systems using the existing WiFi network as well as the newest and fastest version of WiFi-802.11n.

Since Apple TV and iTunes works seamlessly, users can choose from over 400 movies and 350 TV shows in excellent near DVD quality. Besides, users can also watch their favorite movie trailers directly onto their widescreen televisions. Slideshows of photo albums can also be viewed on the television using Apple TV.

Apple TV iTunes 7.1 or later, running on a Mac with Mac OS X version 10.3.9 or later, or a Windows PC with Windows XP Home/Professional.

Apple ships with HDMI, component video, analog and optical audio ports. The Apple Remote ships with Apple TV at no extra cost. Apple TV can also auto-sync content from one computer or stream content from up to five additional computers directly on to the TV without any wires. It can do so using high-speed AirPort 802.11 wireless networking.

Apple TV, which includes the Apple Remote will be available for a price of $299.