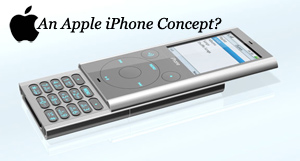 By now, we have all read reports of Apple’s tentative new iPhones that would combine a mobile phone with the musical capabilities of an iPod. It seems that with all the rumors going around, Apple is getting closer to launching its new masterpiece- the iPhone.

According to component suppliers from Japan and Taiwan, Apple will be launching two iPhones- a 3G and a GSM version, which would be available by March 2007.

This may just be a rumor after all, as this one has come only a week after the first rumor started doing the rounds. The first rumor reported that Apple had made a deal with a Taiwanese company to build 12 million iPhones. Apparently, the supplier will manufacture 9 million GSM iPhones and 3 million 3G versions fully equipped with a 2.2-inch display and a 3-megapixel camera. However, these rumors are yet to be confirmed.

Yet another report states that one of the Apple iPhones will support it’s own version of Mac OX C. THis surely is an interesting idea, as this Apple iPhone would have iChat, appointments on iCal and the full mail applications.

The Apple iPhone. What is it? Is it for real? When will it come out in the market? One of the reports circulating says that an iPhone from Apple is likely to make its debut in the first half of 2007.Well, as of now, nobody really has any answers. As usual, Apple is tight-lipped about the whole affair.

All we can say for now is that the introductions of an Apple iPhone could have an adverse impact on sales of music handsets as well as on mobile phones. Analysts have noted that an iPhone could cannibalize iPod sales. But we are sure that Apple cannot resist taking this quantum leap of a move. After all, music is increasingly becoming more important to mobile phone users.

In fact, the popular handset maker, Nokia made a big push into the music-playing mobile phones with its Nseries. The Finnish handset maker has taken the fully integrated approach that was made popular by iPod with iTunes, offering its own digital music service known as Music Recommenders.

It is also interesting to note that there is a school of thought that believes that he launch of Apple iPhone will not be as simple as Apple makes it out to be. As it is, the mobile phone market has some of the biggest names in the corporate world. Besides, the mobile phone market has immensely matured feature-wise, that is over the last few years. Probably, Apple would have to face many challenges as a newcomer, which could include integration of its platform, issues with patented technologies, production cost issues and verification from service providers.