Apple to announce 5 Million iPhones Sold at Macworld, Next Month? 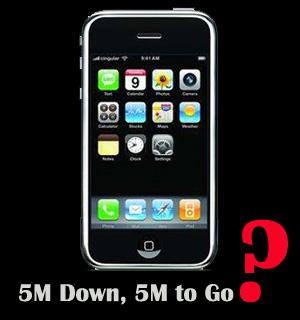 Apple aims to reach around 5 million iPhone sales by Macworld San Francisco, which is scheduled to be held in January 2008, reported 9to5mac.

When Apple sold 1 million iPhones within 74 days of its launch, the next target it set was to hit the 10 million figure by the end of 2008. And if the above 5 million iPhones news stands true, then this means that the company is already half to their goal.

9to5mac states that according to “insiders” around 1 million out of the 5 million sales come from Europe. In fact just a few days back, there were reports circulating on the internet, which stated that the iPhone’s sales have outnumbered those of Windows mobile devices, by capturing as much as 27% percent of America’s smartphone market in the last quarter.

Around 0.09 percent of internet users browse the web via their iPhones, on the other hand only 0.06 per cent users prefer to surf the internet though their Windows Mobile platform.

The drastic $200 price cut is ought to be one of the key reasons for the latest numbers and surging sales. In fact if Apple launches the iPhone in several other countries such as Japan, China, Spain etc, then the 10 million goal is surely not a dream. And if the present 5 million sales reports are true, then honcho Steve Jobs is ought to announce the accomplishment in the forthcoming Macworld Expo Keynote on January 15th.