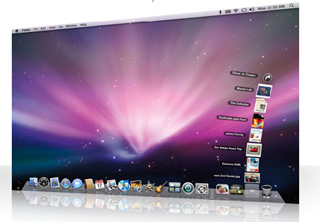 With the launch of the iPhone 3G, Apple had also previewed Mac OS X Snow Leopard. The newly showcased operating system is based on the OS X Leopard and is the next major version of the same OS.

With a new technology code-named “Grand Central”, Snow Leopard offers support for multi-core processors. Hence creating programs that take full advantage of the power of multi-core Macs is made easier for developers.

“We have delivered more than a thousand new features to OS X in just seven years and Snow Leopard lays the foundation for thousands more,” said Bertrand Serlet, Apple’s senior vice president of Software Engineering. “In our continued effort to deliver the best user experience, we hit the pause button on new features to focus on perfecting the world’s most advanced operating system.”

Most importantly, the new operating system supports Microsoft Exchange 2007 in OS X applications Mail, iCal and Address Book, making it easier to integrate Macs into organizations of any size.

Snow Leopard OS is expected to ship in about a year’s time.