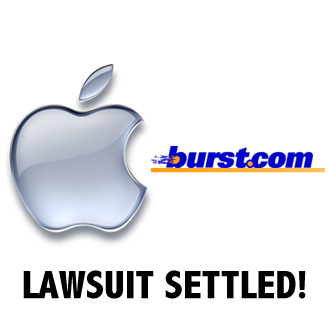 After almost two years of litigations between Apple and Burst.com, the former company has decided to shell out $10 million to settle a patent infringement lawsuit.

By accepting this deal, Burst has agreed not to sue Apple any more with regards to the DVR patent and any other patents that might come about from the pending DVR-related applications.

Burst.com, a Santa Rosa-based company said that Apple would like to make this payment in exchange for a non-exclusive license to its patent portfolio. The lawsuit was actually filed by Burst.com over technologies related to storing audio and video files.

Burst.com asked Apple in 2004 to license some of its patents, claiming that they were at the heart of the iPod. But instead of licensing these patents, in January 2006 Apple sued Burst.com seeking a judgment that the company’s patents were invalid and not infringed.

Three months later, Burst.com countersued and alleged that Apple infringed four of its patents for transmission of compressed audio and video files in iTunes, iPod, QuickTime and iLife.

Incidentally, Microsoft was also sued by Burst.com, and later had to settle it out with the company for around $60 million.