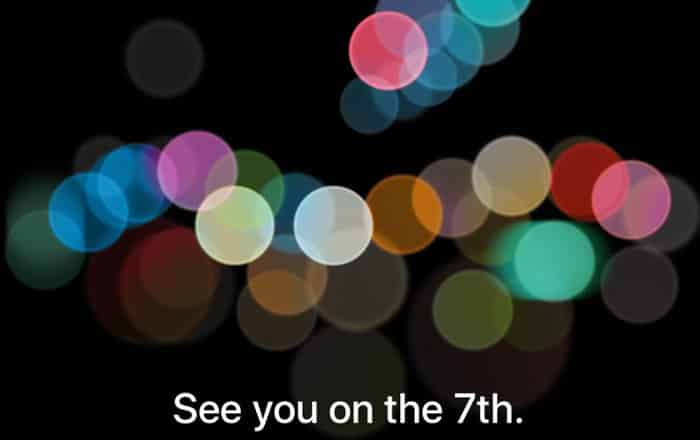 Apple has officially sent out media invites for an event on September 7 where it’s expected to launch the iPhone 7 or 6 SE. The tech giant will probably unveil its next-generation Apple Watch at the occasion as well.

The invite itself doesn’t give much away in terms of information, with the caption simply stating ‘See you on the 7th.’ The emphasis on the number 7 could mean that Apple is planning on calling the handset the iPhone 7 after all, though it’s hardly enough to put the 6 SE completely out of the question.

The iPhone 7 is expected to be a minor upgrade in terms of design over its predecessors. According to rumors till date, the phone will get rid of the antenna lines currently seen on the back of the iPhone 6S and place them along the top and bottom of the handset instead.

More drastically, Apple has apparently eliminated the 3.5mm headphone jack. Owners may be forced to listen to music via wireless Ear Buds or through the Lightning Port. The brand is also likely to incorporate a 3D Touch home button which will return feedback through haptic vibrations in place of a physical click.

A number of reports have also indicated that the iPhone 7 will start with a 32GB model and go up to a 256GB one, getting rid of the 16GB base model in the process. Perhaps most excitingly, the Plus variant of the smartphone may sport a dual-camera setup, an Apple first.

As for the next Apple Watch, speculation insists that the wearable is set to be faster and come with GPS, while still maintaining the same overall look as its predecessor.