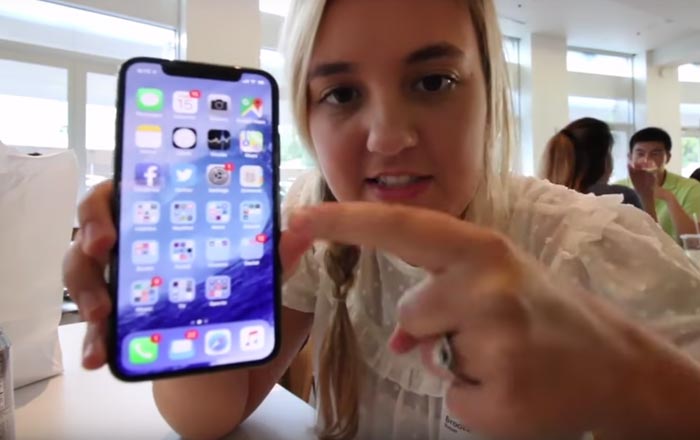 Apple’s come under some heavy fire over the weekend for reportedly firing an engineer over his daughter’s iPhone X hands-on video. The original footage quickly went viral after it got published last week, but was swiftly taken down.

Vlogger Brooke Amelia Peterson’s video simply depicts a trip to the Apple Campus where her father worked as an engineer, building the iPhone RF and wireless circuit design. His iPhone X features prominently, first showing up to pay for food at Apple’s cafeteria using Apple Pay and Face ID.

He later hands over his iPhone X for his daughter to film. She starts showing it off from all sides and opening various tools such as Camera, Tips, and Animoji. This turned out to be a huge mistake since the footage includes special employee-only QR codes.

If you look closely, the Notes app has a couple of codenames of unreleased Apple products. Going by the date on the calendar, it seems the video was filmed on September 15. That’s a few days after the handset got launched, but the device was still unreleased at the time.

Filming a brand new iPhone X appears to have been enough grounds for a dismissal as Peterson recently posted another vlog stating that her father had gotten fired for violating Apple company rules. The firm doesn’t allow anyone to shoot footage on its property, raising the question of how Peterson was allowed to carry her bulky camera equipment inside in the first place.

Also Read: Apple hits back at claims that it reduced Face ID’s accuracy

While rules have definitely been broken, sacking an employee just because he let his daughter film a product that had already gotten announced is a bit extreme. It’s clear the video wasn’t intended to be some kind of tell-all leak, so Apple could have cut him some slack.