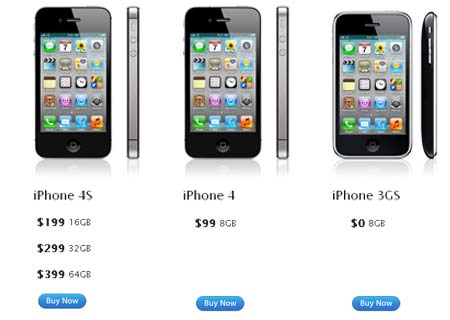 Reports have started pouring in that Apple retail stores will start discounting iPhone 4S and 4 rates to price match the ones offered by carriers and major retailers. Cases like these often denote that something new or ‘big’ is on its way. Well, we’re pinning this on the next generation smartphone from Cupertino that’s supposedly making its arrival next month.

The guys over at Mac Rumors have learned through a source that the company has passed authorization for retail stores to start matching the discounted tags from certified providers and outlets. However, this reduction in cost isn’t in effect just yet. The current on-contract 4S rates from Apple stand at $199, $299 and $399 for the 16GB, 32GB and 64GB versions, respectively. And while the 4th generation phone can be picked up for $99, the 3GS variant is available for free.

Once the changes are in place, a $49.01 discount will be provided to customers on request. Since the 3GS handset is tagged at free, the revised 4S prices will read as $149.99 for the 16GB model, $249.99 for the 32GB edition and $349.99 for the 64GB version, leaving the iPhone 4 at $49.99 after the concession. To avail of the offer, buyers will most likely have to mention a source where the device is available at a lower price. For refresher’s sake, the iPhone 5 is expected to arrive next month on September 21 with a possible October launch.

The report also notes that the price match policy that’s speculated to go live in Apple retail stores for the iPhone 4S and 4 smartphones isn’t applicable to purchases made online.