The Apple App Store has been infused with a separate section named Sharing Selfies to make it easier for iDevice owners to find the appropriate tools for clicking and sharing their self-portrait photographs. The phenomenon that’s called a selfie seems to be gaining large-scale acceptance, and it’s no longer a word associated only with social networking sites.

Apple added the new section to its iTunes App Store this Thursday, and denoted it as one dedicated exclusively towards offering apps that help you capture and share your selfies. At the moment, a total of 12 such applications are occupying space inside the Sharing Selfies section. 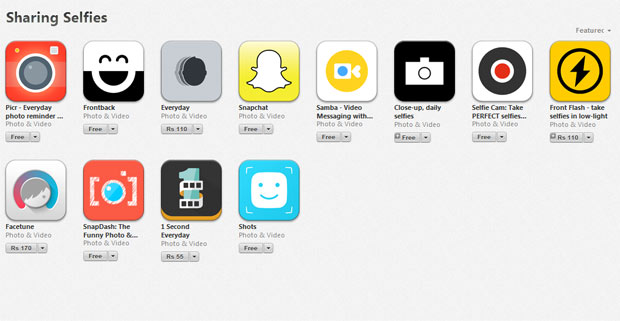 These include the most popular one among them all, Snapchat as well as others like SnapDash, Shots, Picr and more. The recent craze about taking selfies has a lot to do with this move from Apple. Taking self-portraits of oneself or of a group of people has turned into quite a popular activity around the world. No need to remind anyone about the famous picture by this year’s Oscar host Ellen DeGeneres, which turned out to be the most Retweeted picture on Twitter ever.

If only Bradley's arm was longer. Best photo ever. #oscars pic.twitter.com/C9U5NOtGap

Most of the time, these shots are taken through the front cameras of smartphones, but there’s no saying what device can be used. Even DSLRs are known to be used by some for clicking selfies, apart from digital cameras and other devices.

The Sharing Selfies section on the Apple App Store can be accessed now through iTunes.