Apple prolongs the suspense with its highly rumored iPhone 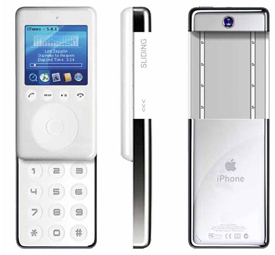 A while ago, we had reported on a couple of rumors on the Apple iPhone that were doing the rounds on the Internet. The iPhone has been rumored to be in development at Apple for years. But tech industry analysts say that they have seen and heard enough clues to think Apple may just have one ready for release early next year.

First the iPhone buzz picked up in November after it was reported by the Commercial Times in Taipei that Apple had ordered 12 million iPod phones from Hon Hai Precision Industry, which is a Taiwan contract manufacturer that makes iPods. Secretive that they are, an Apple spokesman said that the company does not comment on rumors or even speculations.

Next up was a statement to analysts and in U.S. patent filings, in which the highly secretive Apple hinted about a product to compete with music-enabled cell phones.

Here is what Kevin Burden, an analyst with telecom research firm Telephia had to say on the highly rumored iPhone, “”It makes sense for Apple to come out with an iPhone. With mobile phones becoming pretty good media players themselves, they’re already starting to cannibalize the MP3 player market a little bit, and it’s only going to accelerate.”

Among bug questions that are yet to be answered about the device from Apple is whether it would be a phone first and music player second or vice versa. Which function would be given more importance? That is the real question.

Apple knows how to play the game and right now they are probably so busy working on this fabulous device that is soon to be released. As Michael Gartenberg, an analyst with Jupiter Research put it, “Whether the phone is real or not, Apple enjoys the publicity. It is certainly one of those things that keeps Apple’s name out there and generates some excitement and buzz about the company.”