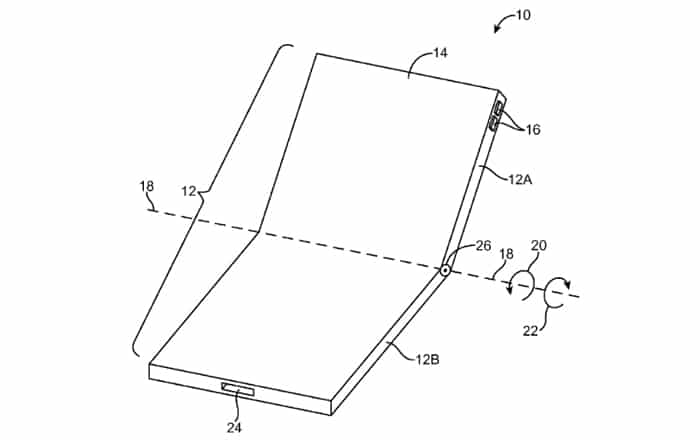 Apple’s been working on a bendable iPhone for years, actively looking into concept designs for a hinged format which can be folded in half. The US Patent and Trademark Office has just granted a patent to the company for such ‘Flexible display devices’ more than two years after it was originally filed.

The patent focuses on an iPhone which has a foldable full-screen display. It works like a flip phone, similar to Samsung’s proposal for a flexible smartphone. Apple’s take on the style involves using an OLED panel which is backed by a metal support structure. It plans to utilize nitinol for the latter, a nickel and titanium alloy which has unique shape memory and elasticity skills.

Designs vary, with one iPhone boasting of a split format which has an upper housing section to hold units such as the cameras, speakers, light sensors, and display controllers. The lower one could incorporate parts like the CPU, GPU, and microphones.

The two are connected via a single or multi-shaft rotational hinge. Apple has two ideas in mind for the folding configuration. One sees the iPhone’s display bend over onto itself like old-school clamshells. The other sees the screen facing outwards instead for easy access.

Interestingly, the second style will also allow users to clip the iPhone to their clothing via sawtooth detents. Apple’s also exploring other alternatives such as making the panel retract within one or both housings.

Apple’s upcoming iPhone 8 probably won’t have a flexible design, though it is rumored to be incorporating OLED technology. AppleInsider thinks the company may bless MacBooks or iPads with the innovation in the future.