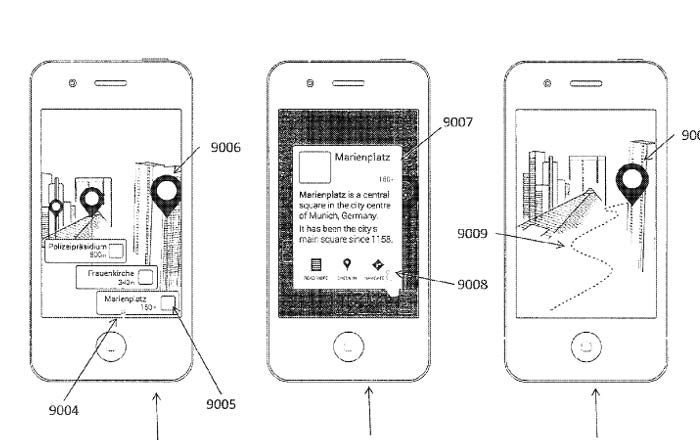 Apple Glasses have been a hot topic of interest for the past few months now, with the brand’s own investment in augmented reality further fueling expectations. The company has now filed for a patent that revolves around AR and its applications for phones and semi-transparent spectacles or glasses.

The patent was filed in April 2017, but is actually an extension of a previous patent held by a German AR firm called Metaio which Apple bought in 2015. That explains the German names seen in the images above and below. Suffice to say, the latter has been working on the technology for a couple of years now, but an actual release date is hard to pin down.

The document mostly focuses on ways to overlay digital information onto a real-world setting, specifically with regards to navigation. The method could eventually find its way to Maps. It basically uses an iPhone’s camera to gauge where a person is and display interactive graphics on top of points of interest (POI) such as landmarks and buildings.

They would also be dynamic, moving along the screen according to the orientation the iPhone is held in but always staying attached to their POI. Tapping on these graphics opens up a window of additional information. The same idea can also be used for other situations, like identifying the parts of a car like the wheel or radio and overlaying videos about them.

As for where the so-called Apple Glasses would fit in, the brand suggests way for wearers to directly interact with their surrounding environment by using their finger to touch digital elements. The device’s camera would track the finger and perform actions accordingly.