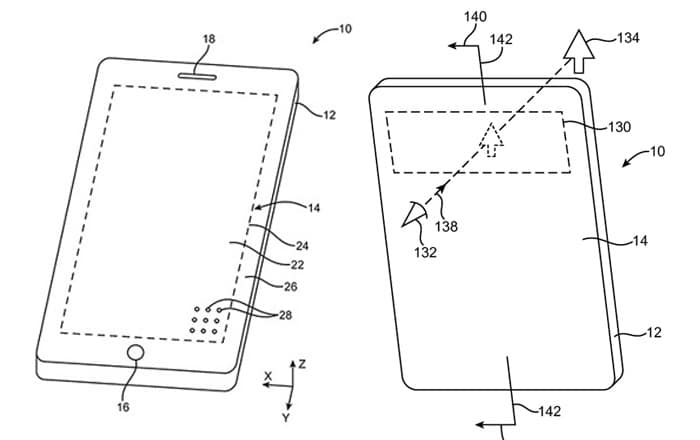 One of the most consistent rumors about the iPhone 8 is that the handset will sport an all-glass edge-to-edge style without any bezels. How exactly Apple was planning on making this possible without getting rid of essential sensors such as the selfie camera hasn’t been clear so far.

This state of affairs is all set to change with the publication of a new Apple patent that was filed in February 2015. The document describes an electronic device that has a display with openings. The method basically allows components to be mounted behind tiny holes that are small enough to go unnoticed by the human eye.

Such a technique makes way for a full-face display without any pesky sensors getting in the way. Moreover, placing parts like microphones or light sensors inside the perforations would let them gather light, acoustic signals, and radio waves, giving them unhindered access beyond the main display layer.

Intriguingly, the patent also talks about a futuristic-sounding heads-up display (HUD) that lets users see through an iPhone’s rear surface via a small transparent window. Such an implementation allows them to view digital imagery on top of real-world objects. The back and front will accordingly have to be translucent for this to happen.

Speculation so far has suggested that the iPhone 8 would feature a glass sandwich design held together by a stainless steel frame. Such a look might certainly help make this augmented reality-leaning window-based HUD technology possible.

As for what this can be used for, an iPhone’s rear camera may be able to collect data about a person’s environment and then project digital graphics with relevant information onto the transparent window. A previous Apple patent had notably talked about integrating AR technology directly into an iPhone’s camera app.

LG To Sell Apple Products Like iPhones Via Its South Korean...

Photos App In iOS 15 Can Identify People By Their Upper...