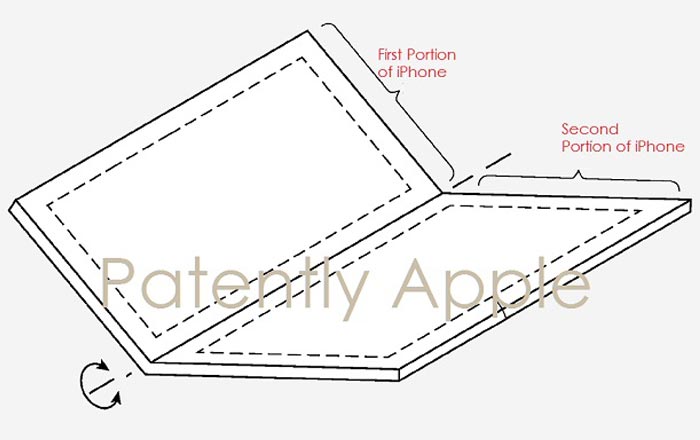 Samsung’s got everyone excited with its folding Galaxy X, but it seems even Apple is busy working on a way for its iPhones to bend. The USPTO recently published a patent application by the latter for a flexible display.

Apple’s patent talks about a screen which a person would be able to open and close like a book. It features a flexible portion which allows the device to bend when folded. The company’s applied for a couple of patents like this before, but this is the first one which talks about using microLED panels and liquid metal as a shape memory alloy.

The application actually covers LED, OLED, and microLED displays being utilized, so it can’t be said for certain what material Apple will eventually go with. A previous report had talked about this foldable iPhone coming to light by 2020/2021. This roughly lines up with the firm’s expected adoption of microLED technology.

Also See: iPhone SE 2 again tipped to launch in first half of 2018

microLED is expected to be the next big thing, offering the benefits of OLED without the drawbacks such as screen burn-in. As for the shape memory alloy, it could be used as the support layer which allows for the bending to take place. This indicates that Apple won’t be using a hinge like the ZTE Axon M, but a properly bendable panel.

Of course, as with any Apple patent, there’s a chance a foldable iPhone may never come to light. The company has a habit of patenting ideas but never promoting them to the production stage.