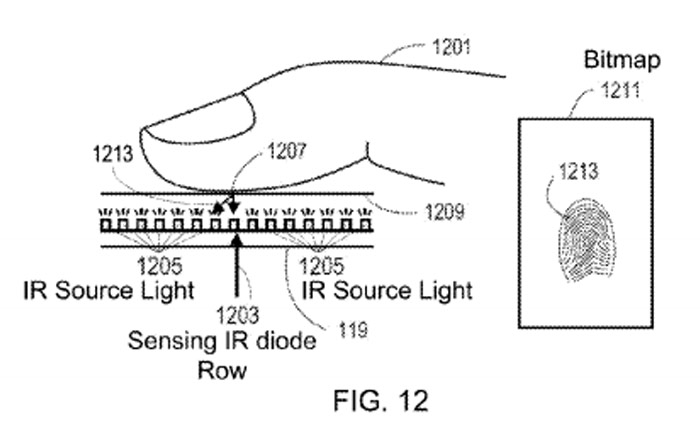 Apple was recently granted a patent for an interactive display panel with IR diodes that paves the path for the removal of the physical home button. The technology may possibly allow the iPhone 8’s display to double up as a fingerprint reader.

Rumors so far have hinted at a home button-less iPhone 8 for a while now, but little was known about how Apple was planning to go about it without sacrificing Touch ID. The patent in question was first filed in June 2014, the same year Apple bought LuxVue. The latter specializes in micro-LED displays that could replace the bulky sensor components seen in handsets today.

LuxVue’s design uses separate IR emitting and sensing diodes to create a subpixel circuit called interactive pixels. This system may be used to perform a wide array of operations such as acting like a traditional ambient light sensor or touch detection. There’s talk of fingerprint recognition which would bounce IR light off an individual’s finger and reflect it back to the sensing diodes.

Apple’s current fingerprint tech requires a capacitive drive ring to be in contact with a user’s finger. This design may be replaced with something far more advanced, as suggested by the patent. The panel discussed may either have a higher density of interactive pixels in certain sections or possess enough of them to transform the entire surface into a fingerprint sensor.

There’s no way to determine whether Apple plans to implement micro-LED technology into the iPhone 8 as of now. It certainly looks likely, given the number of years that have passed since the patent was filed.