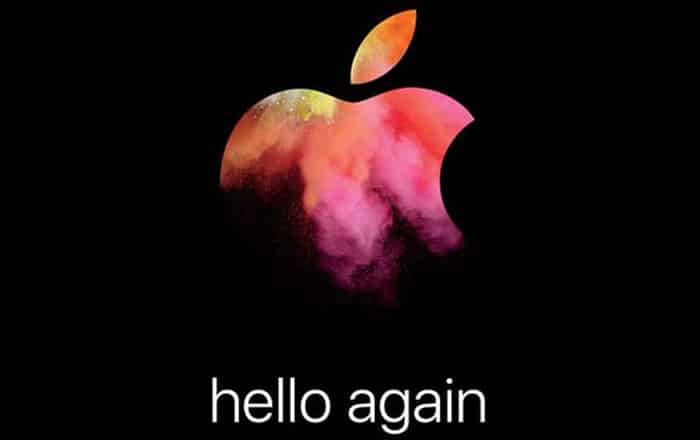 Apple has finally confirmed that it’s hosting an event at its Cupertino campus on October 27 where it’ll probably uncover new MacBooks. The tech giant has begun sending out invites for the occasion with a cryptic ‘hello again’ tagline.

The text may be a callback to Apple’s ‘Hello’ ads for the 1984 Macintosh. This is a strong indication that it’s planning something revolutionary. Refreshes for the Mac series of devices have been long overdue, with the company expected to unveil revamped MacBook Pros, iMacs, standalone 5K monitors, and MacBook Airs after a long gap.

Speculation so far indicates that most of Apple’s redesign magic will be devoted to the MacBook Pro. The laptop hasn’t seen a significant upgrade since its 2012 edition. This time round, the heavyweight may see a unique OLED touchscreen strip replacing the physical keys above the keyboard.

Also Read: Apple may get rid of the MacBook’s headphone jack too

This would serve many useful functions. Firstly, it allows for a number of customization options since users won’t have to be restricted to a set collection of physical inputs. For instance, opening up iTunes might trigger playback and volume controls, while word processing tasks could prompt cut and paste options.

Secondly, a digital interface would allow Apple to push out software updates to add things like new buttons immediately instead of doing so through hardware refreshes a few years down the line. The other big change expected in the MacBook Pro is a Touch ID-enabled power button.

Such a feature might allow consumers to unlock their laptop without having to type a password and authenticate Apple Pay purchases more conveniently. Stay tuned for more on what the company has planned for its Mac series up until its October 27 event.