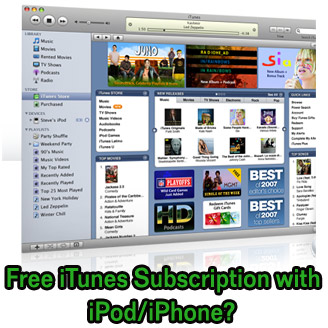 Apple is reportedly in talks with four major record labels to offer its customers free access to the entire iTunes music library. These include Sony BMG, EMI and Warner.

This could mean good news for those who are planning to buy an iPod or iPhone the future as they will not have to pay to buy music from iTunes. However, a source has said that the offering would be free initially, but device owners would later on be charged a subscription fees.

At the moment Apple seems to be negotiating a deal with the major record labels. But, the deal seems to be taking a long time due to a dispute between the parties over the price Apple would be willing to shell out for access to the labels’ media libraries.

An anonymous executive who is familiar with the negotiations has said that Apple offered the music companies $20 per device sold. Nokia on the other hand has offered nearly four times that amount for premium subscriptions.

As of now representatives for Apple, EMI, Sony BMG and Warner have declined to give any comments.