Apple Maps to finally get transit information via iOS 9

Out of the many things that make Apple Maps an inferior service to Google’s similar offering, the fact that it does not yet offer transit information is one. Rumor had it last year that iOS 8 will finally add support for the feature, but that didn’t happen for some reason.

And now, word on the street is that the new iOS 9 update that’s supposed to be showcased at this year’s WWDC event in June will be bringer of transit information for Apple Maps. This means iPhone users will finally be able to view bus, train and subway routes on their devices.

It is said that this feature was all set to be a part of iOS 8 last year. However, Apple pulled the plug on it right before the unveiling of this software version due to ‘personnel issues, data inconsistencies, and coverage for only a small subset of Apple’s major markets,’ according to 9to5Mac. 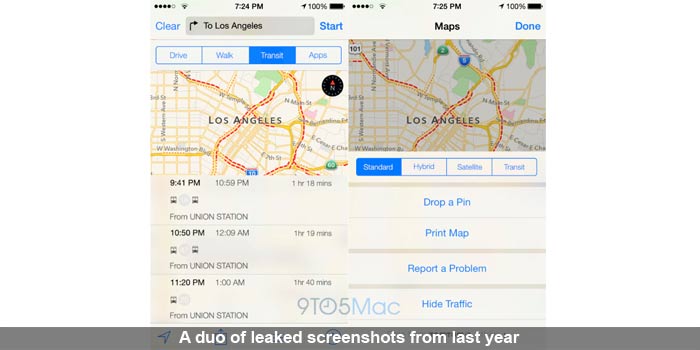 Perhaps the company didn’t want to see the kind of debacle that had occurred when a shoddy version of Apple Maps was first released with iOS 6. The damage was so bad at that time that CEO Tim Cook had to apologize to fans for the ‘frustration’ caused by the application.

It’s from this incident that Apple will have learned to tread very carefully on anything related to its Maps application from then on. Sources have told the above mentioned website that transit details will indeed be landing into Maps via a central upgrade in iOS 9.

The company’s WWDC developers conference is when the transit feature of Apple Maps is expected to be unveiled. This event will be held from June 8 to June 12; so stay tuned until then.