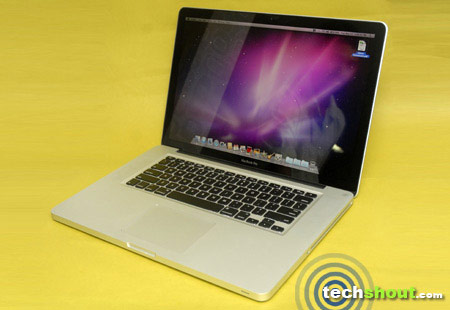 Apple does have a sense of humor. Less than a year after unleashing the iPad upon us all, the company was already out with the iPad 2 with a couple of cameras and a slicker body. But not before making sure they upgraded the MacBook Pro line, of course. It won’t be fair to say that those who counted out the coins for either of these devices would be happy if the company had put some more space between the launch of the iterations. Ever caught tech buffs saying they want anything but the latest version of so and so? We’re just going to start our review of the 2011 Apple MacBook Pro 15-inch by saying that the notebook seems to come with some enviable features in a familiar package.

We got the 15” version Apple MacBook Pro, flush with a 2.2GHz Intel Core i7 processor, 4GB 1,333GHz DDR3 RAM, 750GB HDD and AMD Radeon HD 750M graphics for reviewing. The funny thing is, and we’re not exaggerating here, each time we lifted the lid, a strong fragrance of green apple greeted us. And we don’t mean ‘Apple’ with a capital ‘A’, but actually ‘apple’. We won’t be able to tell you if it’s the same case with every MacBook Pro, but the light fruity perfume was so haunting, we wasted quite some time shoving it under the nose of every other workmate, asking them to take a whiff and tell us if we’d been letting our imagination run wild. Apparently, we weren’t. Starting with what we see first, its 0.9” sleekness belies the 2.5kg weight. The last mentioned does nothing to relieve the fear of dropping the notebook due to its curves and ineffectually roughened casing. Just like any other Apple product, the exterior makes you fall in love at a glance. 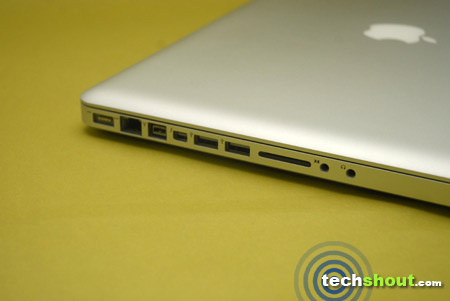 The lid yawns out to a dainty keyboard which looks very intimidated by the rest of the deck space surrounding it. The last mentioned is given to speakers lining the left and right sides of the keyboard. The lower end hosts just a glass trackpad that now accepts inertial scrolling as well as a range of other multi-touch caresses like pinch, rotate, tap, double-tap, drag and what appears to be all kinds of swipe options. You won’t be able to miss out on the idea that there’s plenty of space for resting the wrists on either side of the trackpad either. As for the main input, the typing comfort will always be a matter of contention and vary from user to user. We normally don’t take to keyboards unable to offer a noticeable amount of dip while tapping away on them. But the noiseless, smooth gliding of our fingers on this one with its well separated buttons offers room for partiality. It’d probably just feel all wrong built any other way, taking the overall external architecture into view. 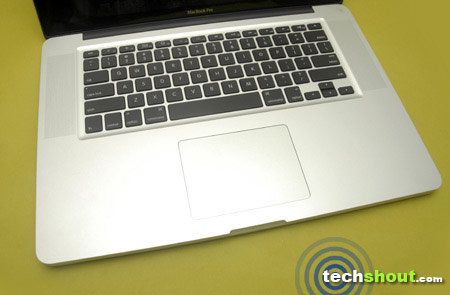 The ports lining the edges show up for MagSafe power, Gigabit Ethernet, FireWire 800, audio line in, audio line out and Thunderbolt. SDXC and Kensington lock slots as well as a couple of USB 2.0 ports also cling to the sides. The MagSafe connection for powering up the MacBook Pro lets the charger clutch it with the help of magnets to make sure the notebook doesn’t take a tumble if someone does happen to carelessly trip up on the wire. It’s when you want to attach a couple of USB peripherals to this Mac that you realize the space between the ports, or the lack of it. We begin by noting the device’s glaringly quick reactions to every command whether it’s for switching between applications or actually putting it through its paces while employing Photo Booth, surfing the web or playing casual games. 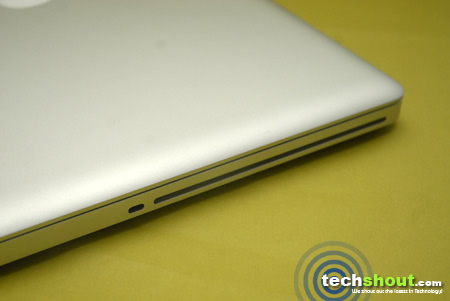 Reviewing a Mac is quite different from going over a Windows PC and those who swear by Microsoft are hardly going to transition to Apple with extreme ease. Or it’s a ‘mind thing’ at least. The way you interact with a Mac is vastly different upon comparison and some of the keyboard shortcuts you’ve memorized for the various everyday tasks on a PC can be chucked away. With regards to multimedia entertainment, the speakers offer some pretty good sound quality and the brilliant colors on the screen leap right into our eyeballs. The FaceTime camera and the accompanying effects as well as iPhoto, iMovie and GarageBand add to the fun quotient. As for the battery life, the MacBook Pro can do a little over seven hours of light usage quite comfortably. 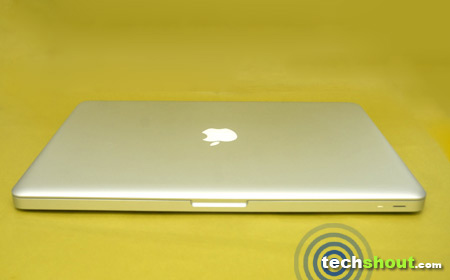 Who doesn’t expect Apple to come out with anything less than elegant and future-proof when the talk is about design? It’s impossible to leave the sophisticated aluminum chassis and fashionably stark deck out of the best attributes of the Apple MacBook Pro 15-inch.

The sealed in battery which is good for almost 7 hours of usage is hot stuff for a notebook its size and capabilities.

Three cheers for the 720p FaceTime HD camera staring out at us from the top bezel.

Apart from the alluring appearance, a relatively high price tag comes standard with Apple products even if we wish it didn’t.

Seeing how Thunderbolt technology has yet to take to the skies, it wouldn’t have hurt to add a USB 3.0 port.

The company has stuck this notebook with a price label which may force fans to think an umpteen number of times before picking it up unless they’re power users who can claim to be on the move constantly. This is the point where a lot of people are either going to take a leap towards or away from Macs. Considering the Rs. 1,24,900 price tag, we can picture a little yelp escaping a least a handful of enthusiasts as they perform the aforesaid leap away from the notebook. How much is the sleek, unibody design, AMD Radeon graphics processor, Intel i7 or i5 processor, Thunderbolt technology and the other major specs worth to buyers? Let’s not forget that it’ll be some time until the wholesome goodness of the Thunderbolt interface is fully leveraged. At the same time, you don’t go shopping for anything Apple without expecting to drop much more change than you would for a similar product from another company. We’re decorating the Apple MacBook Pro 15-inch with a 9 out of 10 rating. It’s beautiful, fast and good with battery life, and these are the main things most portable PC shoppers look out for when picking a laptop.