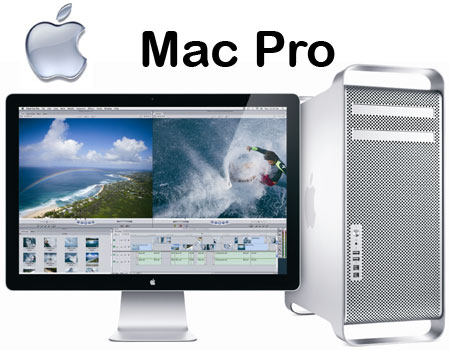 Early in the day we had reported about Apple’s updates to the iMac and Mac mini line-up. The company also announces the introduction of the new Mac Pro desktop computer that is now bundled with the Intel Nehalem Xeon processor and advanced system architecture.

As for the 8-core Mac Pro, it is packed with two 2.26 GHz Quad-Core Intel Xeon 5500 series processors with 8MB of shared L3 cache per processor and 6GB of 1066 MHz DDR3 ECC SDRAM memory, expandable up to 32GB. The Mac Pro models are accessorized with a Mighty Mouse and the Apple Keyboard that includes a numerical keypad.

According to Philip Schiller, Apple’s senior vice president of Worldwide Product Marketing, “The new Mac Pro is a significant upgrade and starts at $300 less than before. The Mac Pro features an advanced system architecture, new faster processors and our best-ever graphics options to deliver a faster, more powerful system that our professional customers are going to love.”

With 4 direct-attach cable-free hard drive carriers, the systems allow the installation of up to 4TB of internal storage via 1TB 7200-rpm Serial ATA drives. The Mac Pro also includes an optional cable-free Mac Pro RAID card. Delivering performance up to 550MB/s, the card allows setting up the four internal drive bays in RAID 0, 1, 5, or 0+1 configurations.

Based on the Leopard OS, the Mac Pro systems are also early adopters of the stringent Energy Star 5.0 requirements. The OS ensures the computer systems are loaded with the features like Time Machine, revamped Finder, Quick Look, Spaces, Mail, iChat and the iLife 09 suite of applications.

Expected to reach stores by next week, the new Mac Pro will ship through the Apple Store at a price of around $2,499 and $3,299 for the quad-core and 8-core models respectively.