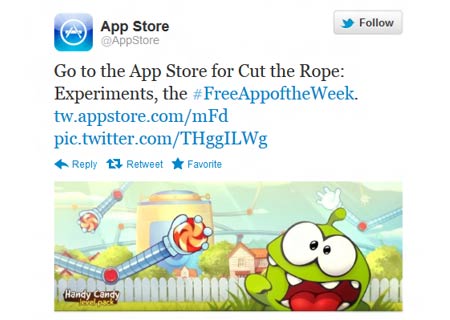 Unlike Amazon Appstore’s daily dose of freebies, Apple’s Free App of the Week‬ promotion plans on putting one paid application up for grabs for a period of seven days, at absolutely no cost. The entire notion was introduced with the Cut the Rope: Experiments game first to feature as a free download.

The news came about through a post made by the official App Store Twitter account. Reported by the guys over at Phone Arena via TouchArcade, the featured application was spotted on the App Store carrying a large ‘App of the Week’ banner. On the downside, it’s still unclear whether Apple intends to continue with the new promotion strategy. And who knows, this could just be a one-time thing.

Developed by ZeptoLab UK, both versions of the Cut the Rope: Experiments game, namely for the iPhone and iPad, may be downloaded for free. The title is the second addition to the popular Cut the Rope franchise. Here, players will once again accompany the green critter Om Nom, through a wide catalog of stages. The main goal is to drop the piece of candy into the monster’s mouth by cutting ropes, utilizing robo arms for assistance and much more. Collecting gold stars unlocks new levels.

The Free App of the Week‬ promotion has already gone live with the Cut the Rope: Experiments for iPhone as well as the HD version of the iPad, available for download through the App Store. So what’s next in line? We’ll just have to wait until Saturday to find out.