Apple to launch SOS button for iPhone in India

Apple may be getting ready to add a panic button just for its Indian users, as mandated by the government. The feature was first spotted in earlier versions of iOS 10.2’s beta avatars, but has now been removed in the software’s third beta iteration for all nations except India.

If a panic button does indeed make its way to the official version of iOS 10.2, it could be Apple’s first India-only offering. Dubbed Emergency SOS, the tool has possibly come about because of the Indian government’s order for all manufacturers to install a panic button in its handsets starting from 1 January 2017.

iPhone owners who are on iOS 10.2 beta 3 can head into Settings followed by General to spot the new Emergency SOS option. They’ll have various options at their disposal such whether they’ll have to press the sleep/wake button 3 or 5 times in a row to make the call and whether to play a warning sound while the feature counts down to call emergency services.

The default emergency number appears to be 112 which is India’s new single emergency code. The helpline is also set to be active on 1 January 2017. It’s saved under the name Distress Number in Contacts. Users will be able to add more phone numbers to send emergency alerts to through the Health app. 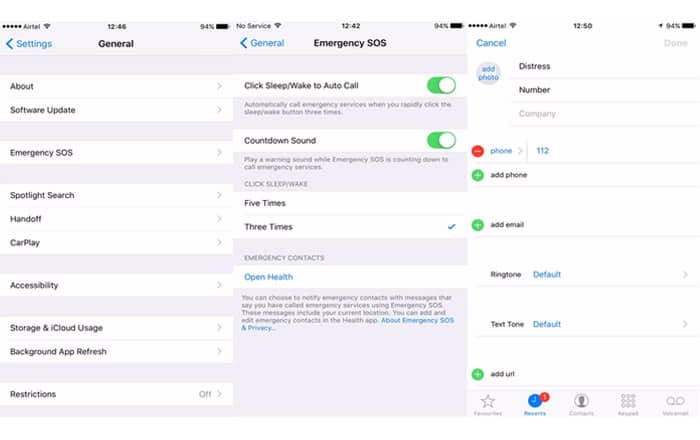 These contacts will get a message informing them that the user has contacted emergency services via Emergency SOS. The missive is also going to include the iPhone owner’s current location. Apple’s also made a few other changes in iOS 10.2 beta 3 like removing the Videos app for its new TV one in the US and a new Send With Love Screen Effect in Messages.