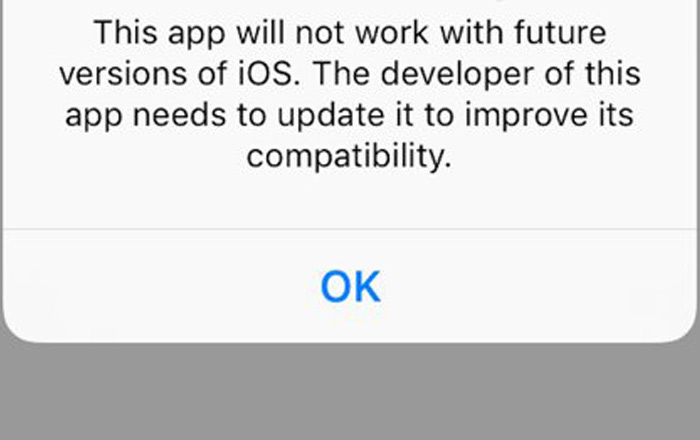 32-bit apps on iOS have been dying a slow death for a while now, with Apple sending out foreboding alerts to users warning them that such applications would bring about slowdowns. Now it seems the tech behemoth is stepping up its efforts to eradicate older tools with a new error message.

Apple’s note pops up in iOS 10.3 beta when trying to open a 32-bit app. It declares that the app will not work with future versions of iOS. The notification further states that the company behind the application needs to update it to improve its compatibility.

Developer Peter Steinberger thinks this escalated warning is an indication that 32-bit apps won’t work in iOS 11. All handsets starting from the iPhone 5S have featured 64-bit processors. It appears Apple is ramping up its efforts to kill the older system entirely.

Also Read: This is what the iPhone 8 could look like

AppleInsider notes that Apple called for all new apps to feature 64-bit support all the way back in February 2015 and extended that policy to app updates in June 2015. The company’s shift will effectively make 32-bit based devices like the iPhone 5 and iPhone 5C out of date; cut off from both iOS and app upgrades.

If Apple follows its past patterns, it’ll probably announce iOS 11 at the Worldwide Developers Conference in June and release the OS alongside its next generation of iPhones in September. Till then, iOS 10.3 should come out of beta and provide people with useful features like a Find My AirPods tool and Reviews API.