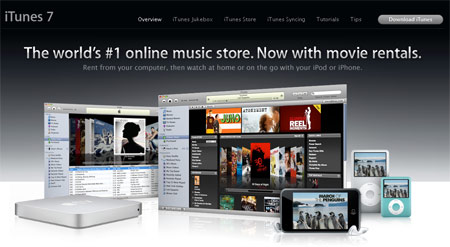 Apple has proudly announced that music enthusiasts have downloaded over five billion songs from the iTunes Store. Apple claims that the iTunes is the most popular music retailer in US.

Rented movies can be watched on most of the gadgets offered by Apple including Macs, all current generation iPods, iPhone and also on a widescreen TV with Apple TV. Further users can enjoy these movies on their PCs too. Moreover, customers can purchase these movies through iTunes on the same day as they release.

iTunes catalog is further equipped with over 20,000 TV episodes and around 2,000 films including over 350 movies featuring high definition video.