Reportedly a lot of Chinese iTunes users are facing inaccessibility to the Apple’s iTunes Music Store. It seems that the Chinese officials have blocked the access to this service to block the download of “Songs for Tibet” a 20-track pro-Tibet album. 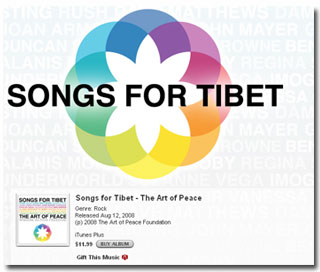 While people from all over the world came together in Beijing for Olympics, this move by the Chinese officials has upset people, creating a not so happy environment. More so because China-centric service from iTunes, so it is estimated that the visitors in the country from foreign must be accessing the service. Apparently, around 40 Olympic athletes had downloaded the album after which the access to the album as well as the service was found to inaccessible.

Apple users have been reported to vent their anger on the net on Apple support forums. There is no official word from Apple.

The Songs for Tibet album features works by great, high-profile singers that include Sting, John Mayer, Dave Matthews, Moby, Alanis Morrisette and many others. Also featuring in the album is a 15 minute talk by Dalai Lama, the Tibetan Leader in exile. The album is produced by Art of Peace Foundation. The album is available for $11.99 on iTunes.