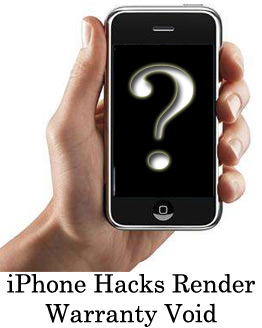 On September 12, we had reported about the iPhoneSIMfree solution for unlocking Apple’s iPhone that previously required people be tied using the official carrier AT&T. This solution manages to unlock the iPhone successfully. But, at the same time, it may prove to be of no use at all.

Apple has today released an official statement on this issue of unlock solutions available for its revolutionary iPhone.

Since Apple has discovered that there are many unauthorized iPhone unlocking programs available widely on the Internet, the company has now warned customers that such solutions could cause irreparable damage to the iPhone’s software.

Apple further explained in its statement that if such as unauthorized unlock software was used on the iPhone, it would result in the modified iPhone becoming permanently inoperable when a future Apple-supplied iPhone software update is installed.

It has also come to be known that the next Apple-supplied iPhone software update contains a number of new features such as the iTunes Wi-Fi Music Store. This update will be released sometime later this week.

Here is the official warning that Apple has issued through its statement made today: “Users who make unauthorized modifications to the software on their iPhone violate their iPhone software license agreement and void their warranty. The permanent inability to use an iPhone due to installing unlocking software is not covered under the iPhone’s warranty.”

So, even though many hacks for unlocking the iPhone are available today on the Internet, it may not be worth it for they could just render your newly acquired iPhone useless.