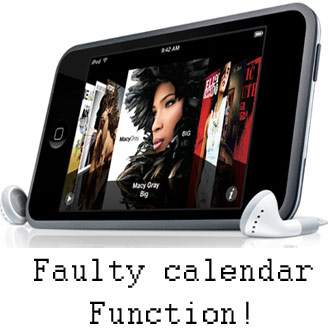 It has only been a few days since the launch of Apple’s next-generation of iPods. The one that stood out the most was the iPod Touch complete with its touch-sensitive screen.

In fact, one can say that the iPod Touch is an iPhone sans its telephony capabilities. Now, it has emerged that trouble may be brewing for Apple with regards to its latest iPod Touch.

First off, it appears that the new iPod Touch’s calendar function fails to work up to the mark. Due to this, users are reportedly not able to add events or appointments.

Actually, the calendar application on the iPod Touch has been designed to sync with the data on the computer of the user.

Apparently, the iPhone calendar application allows the user to enter in information from the phone itself. However, this function seems to be disabled in the iPod Touch, even though they both use the same operating system and application framework.

As of now, Apple has not issued any official statement on this matter regarding the iPod Touch’s supposedly faulty feature.

Apple is known for the hype it creates. Whether it’s before a product launch or even after the product has been launched, the company is always in the news. Even a few days after the iPhone was launched, it was reported to have some flaw in its browser.

It seems that for Apple any publicity is good publicity.