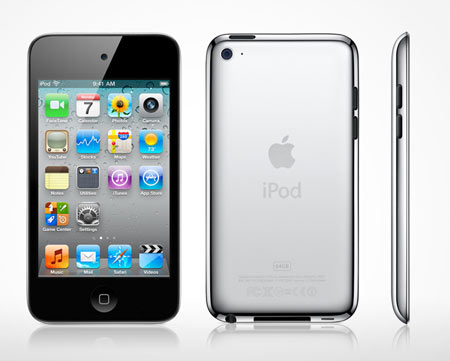 Right from the simple idea of devising a feature-rich media player with an astonishing glossy body to augmenting the standard with tweaks of camera and sturdy attributes to stiffen the tug-of-wars, Apple’s chronicles of surprising events cannot be forgotten for a swift change that has been spotted. Though we have a soft corner for Apple’s tots for some reason, scrutinizing them from head to toe is something we like doing. This time, we got the Apple iPod touch 4G (4th Generation) on our desks for a comprehensive run through. Here, we forge with what really happened through the analysis in our exclusive review.

Like other members, the fourth generation music rider comes packed in a not-so heavy box that neatly accommodated a pair of headphones, a user manual, a USB cord and the main unit. Though we already knew it, the dimensions have been heavily slaughtered, letting it snooze on hands gave us a great feeling, yet again flanking Apple in the category of sleek gizmo makers. Overall, we quite a lot liked the sleekness, cutting it slightly in terms of length is something we don’t feel good about.

We would have rather slipped on that part unless the thought of running it into a tough competition with its older sibling had not crossed our mind. The sleekness and how nicely it’s been given sharpness is something we were hooked to the most. With basics intact, the size gets trimmed down this time. However, we cannot grumble about not bringing any alterations to iPod’s appearance since that’s something we have known and been admiring the device for quite some time now.

Inspired is the word here by still giving space to the smudge inviting chrome rear panel. Incredibly sliced out in terms of looks, the new unit from Apple’s world of music gets us high for its sleek dimensions. Getting back to something that we are good at, that’s comparing, as with the old version, the delicate yet so powerful body accommodates a home key – like iPhone and older versions, a power/sleep button – same again, and two volume buttons on the left – nothing new here as well. Though we had planned to scrutinize the touchscreen aspect later, swiping it to unlock gave us a pretty good idea of its touchscreen level in the beginning only. We could spot a tiny camera taking ten in the upper corner of the framework and a camera button jumping high to get noticed. Well, details on the camera accoutrement will be provided later as we drill the section after ‘what’s new’ in the appearance of the Apple iPod touch 4G.

The looks department lets good points enter. The thinness is certainly welcomed, but there’s nothing tempting enough to ditch the earlier version as far as looks are concerned. Underneath the structure, Apple has given room to its A4 processor which has the hardware category searing pretty hard. On turning the device on, we were welcomed in similar manner like the previous models have greeted us with. Talking about the screen foremost, the clarity surpasses like always and reveals brightness sufficing to pep the enthusiasm. 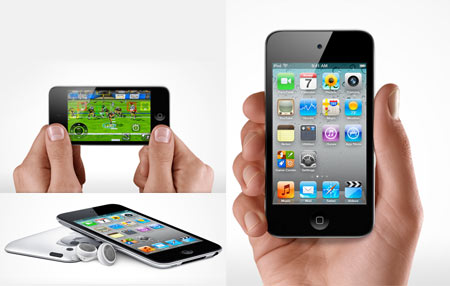 The 3.5-inch capacitive touchscreen yet again swayed us not only for its laudable size, but also for what it throws out from inside. The clarity level gets thumbs up for letting us avoid unnecessary activities hovering around and immerse in crisp and sharp images. As far as watching videos were concerned, the experience was good once again. Putting up our comparison caps for the third time, if not mistaken, our analysis takes a new turn further. Though slightly condensed than Apple iPod third generation, as aforementioned, we liked the device’s compactness powered by new features like a camera, game zone and FaceTime.

Coming to the newly added camera, the quality is decent but certainly not as great as we would normally find on our mobile phone. But as ‘something is always better than nothing’, the assimilation of a camera delivering sound quality is in. This definitely makes us ask – why is the delay not accompanied by good quality? But the camera here comes partnered with abilities like ‘Email Photo, Assign to Contact and Use as Wallpaper,’ like the previous version minus camera. Divulging some details on our encounter with iPod’s moment-freezer, colors were quite a lot washed out and taking mediocre still photographs is what comes straight from it. We could capture 720p videos, which somewhere made us feel better than how we were feeling while exploring the device’s camera caliber.

Disappointment on the above stated front gets higher on discovering the camera as being fixed-focus instead of auto-focus. Yet again, Apple misses on Flash. If comparisons have to be drawn between the camera quality and the video quality, we wouldn’t mind favoring the latter one for pleasing us with clear and good clarity.

We also liked the way Apple has managed to squeeze a super sharp Retina display into an even thinner framework. Apart from this, we don’t mind appreciating the iPod touch 4G’s most highlighted aspect ‘FaceTime.’ The exploration of this particular feature kicked off with selecting a contact in FaceTime and tapping the dedicated button. We could conveniently switch to the rear camera. It was only when our friends divulged some interesting details on our background; we could notice that sharing our surroundings has been made feasible as well. Apple has slackened off the short tour to this added functionality by letting users access their email, the web, or other apps by pressing the Home button.

On a general note, the app works pretty well and will make many happy for what it offers. Before we forget about the touch’s one of the highlights, the display delivers crisp and sharp quality. As far as the clarity level is concerned, we don’t find a striking difference, it could be somewhere better than the previous version but being less clearer is definitely not there. We appreciate the quality that the new iPod touch comes with and also how every widget appears astoundingly bright. For those whose eyes are sensitive to loud clarity, the option to decrease the brightness level always eases off under settings.

Sound quality is something we would like to discuss next. Those who’ve had a taste of Apple’s earlier iPod model won’t spot any major difference on the quality front. Definitely, the quality level doesn’t make you toss your last gen model in the trunk for your siblings to get their hands on. Overall, the verdict comes out as powerful since listening to our favorite tunes topped our to-do list when we first laid our fingers on the super portable music cave. Also if asked what’s inside the music box, playlists, artists, songs, albums, audio-books, compilations, genres, or iTunes U secure a place, so nothing new there. But we guess, being Apple’s loyalist and admiring iPod for its sturdy sound quality are two strong enough reasons to latch on to it.

Touchscreen – something Apple has learned the ropes about. Our encounter with the device’s touchscreen was super fluid and we were happy to see some slight improvement in the same. If ‘as smooth as butter’ defines smoothness at its best, we probably won’t mind reciting it here. Full marks get listed on the iPod’s touchscreen part considering our swift scrolling and swiping through the pages. On the other hand, the idea behind plopping down a huge non-beta game center is a sure delight for gaming enthusiasts. If playing those favorite titles while soothing aural senses make your day, the iPod 4G can be your buddy. Totting up, performance was silky smooth on the touch and we don’t mind repeating ‘Apple’s the best’ as far as the touchscreen is concerned.

Though not heavily supported, we can still give away good points to Apple’s final bestowal of multi-tasking capability. This was examined when we tried running multiple applications at the same time. Switching between applications came easy to us, while double-clicking the Home button gave us an opportunity to quickly glance over the recently used apps. On a whole, we should be thanking Apple for finally embedding the multi-tasking facility, and feel happy since the prayer has been answered.

As someone said it wisely ‘we should never underestimate someone’s value,’ drawing a blank on the ability to create folder and organize applications before we top off isn’t good. Amidst all, we also enjoyed touching and holding an icon until it started jiggling; earlier iPods have given us that though. We liked dragging one icon onto another to create a folder and how the folders were then automatically named by category.

Apple does it again with the iPod touch 4G. Like always, the experience of touchscreen indeed made us forget the others in the simmering race. It was super fluid and swift, something which the company has been known for.

The fact that entertainment hub now features a camera to capture perfect moments cracks a smile over our face. We literally liked the company’s this move. Video quality is decent though.

Sound quality is phenomenally great, while the display clarity gets a step-up.

Its slim body redefines portability for users who like assigning their ears a meaningful task while traversing or doing something else.

We wish Apple could have fitted the camera with high-quality. Freezing pictures somewhere left us with pixilated images.

Amidst all this, Apple shouldn’t have minded accommodating a 3.5mm port, for those who will grumble over having damaged their sensitive pair of headphones.

In a nutshell, Apple’s iPod touch 4G impresses us not only for its considerably slaughtered looks and thumping sound quality, but also for planking two cameras, Game Center, and the Retina display. If good looks, power packed performance and great sound quality with sleekness enough to slide into those skinny jeans are on your list, the media player should get a straight entry then. And not to forget, a bag of new features is compelling too. For behaving adequately while keeping us totally engrossed, we are happy to give it a rating of 8.5 out of 10. A price tag of Rs. 19,900 comes slapped on it.