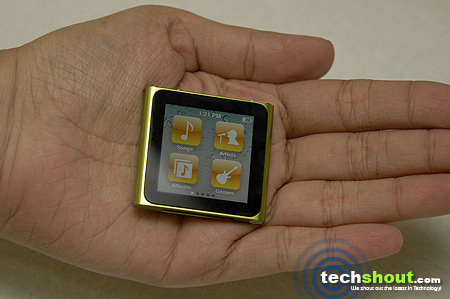 Apple completely abides by the ‘shed that flab’ theme. With each generation leap, we have seen their devices so sleeker and sleeker. If we go back to the ancestral trail of iPod Nano, the device looks almost similar with just one generation as exception. However, Apple took markets by a surprise this time with its newest sixth generation Apple iPod Nano. No the device hasn’t gone sleeker, in fact it has diminished in size just like square Shuffles that the company had been dishing out. Apple is quite adamant on maintaining the Shuffle without a screen. On the other hand, it answered everyone who wondered by those small square devices don’t come with a screen as it was probably destined for the new square tiled Nano. The iPod Nano now possesses an attire that Apple is best at – a touchscreen display. Without much ado, let’s take you through the attributes of the sixth generation Nano by unfolding its attributes one by one through this review.

Compared to its predecessor, the sixth generation iPod Nano drops its rectangular shape for a sqaure one. It also lets go the popular click wheel for a complete touchscreen. As we pulled out the iPod from its minimal packaging box, it felt as though Shuffle got back its older shape with a screen. Nevertheless, the Nano is one chic piece of innovation. This time around it actually adheres to its name, at least its wee size says so. The device has undergone a complete makeover, evidently. The neat square box with rounded edges accommodates the device along with a similar shaped information booklet and user guide, USB cable, earphones and Apple logo sticker.

Among a plethora of trendy colors it dips into, we received the green Apple iPod Nano. The front surface has been integrated with a 1.54-inch display with 240 x 240 pixel resolution. The left side of the top edge has physical volume controls in the form of two round buttons while they are accompanied by a sleep button. This button acts as a hold button if you press it while music is being played and can also be used to put the screen off, otherwise the Nano does not come with a power button. On the lower edge are the headphone jack and 30-pin dock connector. The top and low edges are maintained flat while the sides go all curvy. The backside has a clip, finally making the Nano a good workout companion. Needless to say, the back also has the prominent Apple logo etched on it.

Though the screen is small, the integrated pixels emit bright images. However, if you have been using Apple devices then you could be a tad disappointed with its image quality compared to what the company has been offering us until now. Moreover, we were glad to see the screen support multi-touch functionality. Its capacitive touchscreen executes commands ordered by your finger touches instantly such as swipe and rotate. Both these touch gestures functioned well, offering a response that one would expect from an Apple touchscreen. 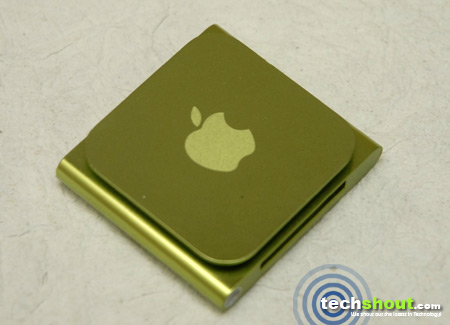 The interface of the iPod Nano gets the typical Apple touch (no it isn’t iOS). Ensuring that the menu does not look all cluttered, multiple homepages can be customized. We divided the homescreen into four pages, each page with four menu icons except the last page featuring three. You can use the swipe function to move from one page to another. Its home pages can be customized according to your preference. If you just touch the screen and hold for a couple of seconds, the icons leave ground and can be swiped to other pages.

The Menu includes Playlist, Now Playing, Genres, genius Mixes, Radio, Podcasts, Photos, Songs, Artists, Settings, Composers, Fitness and Clock. The music player outs several options to choose that rhythmic tune – albums, genres, composers, all songs, playlists and Genius Mixes. The screen displays the album art while a single tap on it brings out music controls like play/pause, previous and next, of course all are touch. On long pressing previous and next touch buttons, we could also rewind and forward a particular song respectively. The Settings icon let us tweak brightness of the screen, date and time, select wallpaper and more. You won’t find any back button with the device and one can navigate using the swipe function to move to the left or right. It also comes with the option to Shuffle.

The audio quality of the Apple iPod Nano is good and we could tap our feet to those peppy tunes even when on the go. However, the bundle includes the same old angelic white earphones. So, do not expect complete isolation from the surrounding noise while you travel. Some leaps with the earphones accompanying would be appreciated. Evidently, the size and the clip-on feature shows that this touchscreen device is for those with an athletic streak within them or trying to cut down on those extra kilos. However, Shuffle still seems a better workout companion for its mere simple usage.

The FM feature of the Apple iPod Nano shows the screen displaying the channel. Just below it, one will notice arrows to move to other stations and the touch stop-button. Moving lower is the station slider and one can move through stations by swiping a finger across it. Besides, it comes with Live Pause function and Favorites.

The integrated accelerometer is put to use in features like Shake to shuffle and pedometer. The pedometer keeps a tab on your steps, allowing users to set health goals. It also supports the Nike + accessory. Disappointingly, this Nano has no room for camera which was an addition in the previous generation. Users can neither record videos nor view them. So, all in all, no video support for Nano after reaching its sixth generation.

We were glad to see that Apple has retained the Photo Viewer. We could quickly sync our photos using iTunes (this does not ever mean that we love iTunes). Those wondering about the image quality on its small screen could be surprised when pictures appear sharp and crisp. A single tap on them shows controls like moving to previous/next image, moving back to folder and slide show. Double tap let us zoom into the image while two finger rotate further added to the convenience. It also delivered a decent battery life which stretched to almost one day. 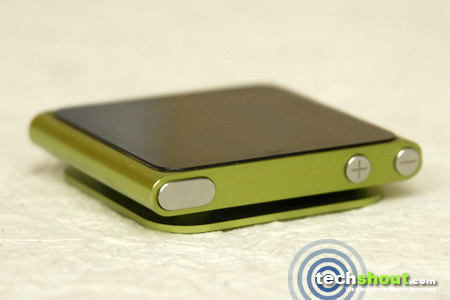 The new design of the sixth generation iPod Nano is chic and slick.

The touch interface is quite swift and responsive. The supported touch gestures function well.

We were glad to witness the extended battery life, making the device a good travel companion while it size (with clip) enables it a cool gym companion.

We were disappointed to see the Nano drop support for videos.

A change in the earphones bundled by Apple is eagerly awaited.

The sixth generation Nano comes in an all new form. You could be disappointed in some departments especially with Apple taking off the video support completely. Nevertheless, the new rejuvenating design and good audio quality enables it a must-have. The device is available in 8GB and 16GB memory capacities priced at Rs. 10,700 and Rs. 12,700, respectively. The sixth generation Apple iPod Nano has climbed the rating scale as high as 9 out of 10.