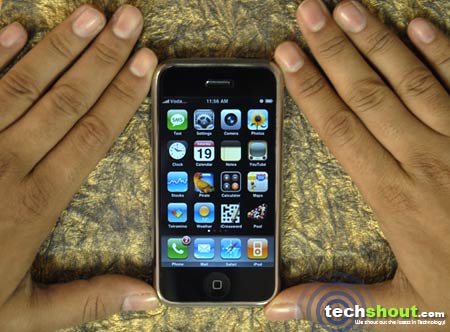 We were quite lucky to try our hands on the world famous and the much coveted phones of them all – the Apple iPhone. The sleek phone steps with a glossy touch-screen that invites the person to its variety of icons and features. The fully touch-screen phone has become an iconic figure for the mobile industry with every mobile manufacturer imitating the iPhone design. Apple definitely deserves a salute for carefully designing the complete touch screen phone. In this iPhone review we took a closer look at both the negative and positive aspects of this smart phone.

The iPhone provides every type of access, right from weather to stocks to games. The touch-screen and motion sensing games have the ability to grab a lot of attention. The phone shows off it 3-inch display proudly that is so compact that even the SIM card is fit into the slimmest of trays and pushed into the phone.

The phone’s thread SMS is an attractive piece of innovation where the phone links all SMS received and sent by one particular contact and displays in a form of tiny pop-up background resembling a chat system. The phone has another outstanding feature which is the ‘zoom-in/out’ function which needs to be done by spreading two fingers in and out on the screen which looks ultra-cool and stylish. The other plus points of the iPhone involves the self-adjusting screen which tilts the screen to either landscape mode or vertical look dependent on the way the phone is held which is applicable for pictures and web-browsing. 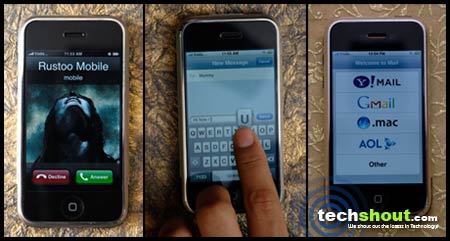 Videos can be viewed on its full-screen mode utilizing the landscape view which delivers a crisp audio and picture clarity. The phone is well known for its music quality and the iPod on the phone proves it right by playing the music in the most crystal clear form through its headphones and even the speaker quality of the phone is exceptional. The phone powers itself using a charger or an USB cable through the computer. The transfers of media files can occur from iTunes which once accustomed to, becomes an easy task.

The Safari application is an eye to the world of internet. The application browses the internet in a smooth manner with options of typing in QWERTY style in touchscreen mode and also gives a landscape view when it is tilted horizontally which provides a better and wider view on the screen. The application also loads two or more internet pages similar to the computer interface where two or more pages can be accessed. 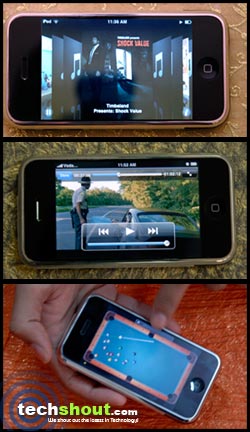 After speaking of so many plus points of the phone, the downsides are something that cannot be hidden, as a glass half full is also half empty. The iPhone does well with the thread SMS, however if you choose to separate the thread of messages, it cannot be done as the phone will delete the whole chain of messages received from the contact. The phone also does not support forwarding of messages or copying of text from text messages. The 2-Megapixel lenses can click amazing photographs but is unable to record a video though. The Phone may smartly transfer files through the iTunes but it can be a little hard to get the hands on to iTunes and also Bluetooth transfers to other phones other than the iPhone is sometimes problematic due to the compatibility issues. The battery-life of the phone seems to drain out a lot quicker, if you are addicted to its games, then you can keep the charger handy as the battery life isn’t that impressive.

The reason for the iPhone being awarded only 8/10 points in this review is due to its few negatives, especially text messages that cannot be forwarded and a few compatibility issues pertaining to Bluetooth transfers and so on.

While the 3G iPhone is getting ready to hit the markets soon, hopefully the above mentioned downsides have been addressed by Apple. The overall experience of the phone seems to be a very pleasant one, especially with its excellence and elegance in its touchscreen and the world-famous crisp music quality features. The iPhone can be best suited for those who prefer to go with the looks and stylish features of the phone. With all the hype and attention the phone has received, the iPhone surely supports some excellent features and lives up to the expectation and gives a nice experience with the Apple’s support and touch of sophistication.