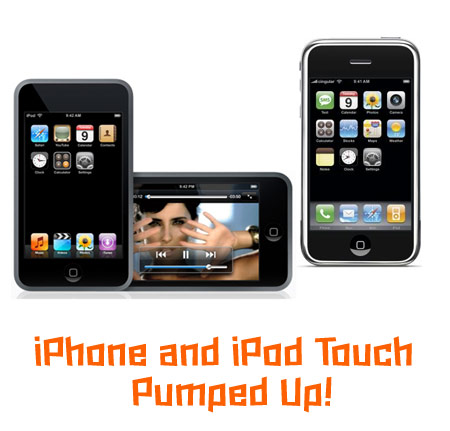 The iPhone and iPod Touch just got mightier.

Apple has boosted the capacities of its 2007’s flagship products (no points for guessing them!) the iPhone and iPod Touch. The iPhone will now be available in capacities of 16GB as well, which means double the storage, double the capacity and of course double the fun of using this touchscreen amalgamation of the iPod+mobile phone. By just shelling out 100 more bucks, you can get this phone in twice the previous capacity. But if you yet feel that the 8GB one suffices your need, then stick to your old choice of 8GB version which retails for $399.

Coming to the other memory boost device is the iPod Touch, which is now available in a whooping capacity of 32GB. So perhaps your passion for entertainment may come to a stop but the iPod Touch won’t cease to entertain you, thanks to its astronomical capacity. The new 32GB iPod Touch will be priced at $499, while the older models of 16GB and 8GB will continue retailing at $399 and $299 respectively.

Of course, apart form the memory enhancements, no new features have been incorporated in either of the devices. Though the previous models of the iPhone as well as the iPod Touch have had quite a smooth sailing in the markets worldwide, the former has encountered quite a bit of problems in other terrains. From a faulty calendar function to the web dialer to the price cut dispute and uproar which compelled the company to offer a $100 rebate to its early buyers – the device has seen it all. And believe it or not, there are as many as 1.7M iPhones that have gone “Missing“.

Though the latest memory enhancement seems great, for a fact most of the people who buy these products are Credit rich guys who wouldn’t mind living in a measly condition but would be yet keen to own the device. Sadly the 4GB version was dropped, which was somewhere in the reasonable price range. Well, for sure Mr. Jobs you know best what you’re doing for Apple and as they say the best things in life don’t come cheap, so be it!