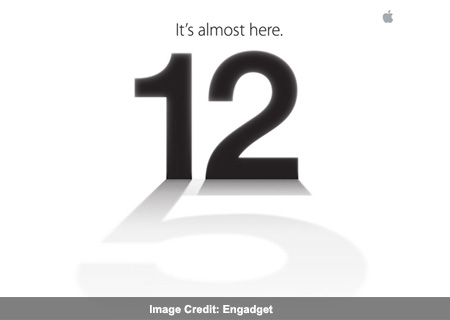 All the rumors and speculation surrounding the next iDevice will soon be put to bed as Apple has sent out invites for a September 12 event hinting at the iPhone 5 launch. The teaser comes not from any cleverly-worded text, but from the cheeky little image that the company has released which can be seen above.

Members of the press were sent the invite to the launch event based out of San Francisco, where it is expected Apple will launch the next iPhone. The September 12 date has been rumored for some time now and the company has chosen to make it official with the tagline ‘It’s almost here.’

Among the many rumors surrounding the smartphone, the one that it would sport a 19-pin mini connector takes the cake with the one stating a September 21 Verizon release date coming in a close second. Scores of others also had a good time doing the rounds with one pointing to such changes as a 9-pin dock connector.

In July it was reported that the phone had already entered mass production, while just last month the iPhone 5’s logic board was apparently snapped and pictures of the same were leaked. The most recent one to come out of the ever-churning rumor mill was related to redesigned headphones, which did feature an atypical and uncanny form factor.

What we do know is this; the Apple iPhone 5 or the ‘new iPhone,’ if the company decides to go that way, will likely be announced next Wednesday. And as Engadget reports, the keynote is scheduled for 10AM Pacific Time in San Francisco.