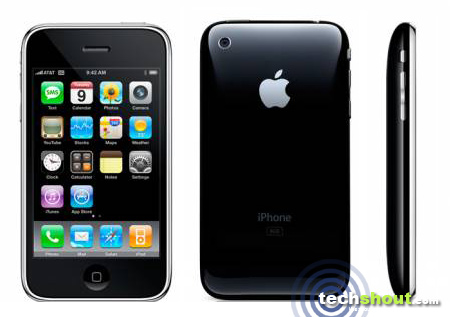 Apple embracing aesthetic simplicity over elementariness with its peripherals isn’t something new. From the Newton Message Pad handheld device to today’s innovation of the iPhone 3GS, the iPhone 4G and the most recent iPad, Steve Jobs has persuaded all to fathom that yes it’s meant for innovation the way Jordan for shooting a ball through a basketball hoop. Just after scoring good in iPhone 3G’s write-up, the company set up for a faster version and dished up the 3GS. Snoozing in an ultra-sultry way, we couldn’t say ‘no’ when it politely asked us to review it. To call shots if Apple’s ‘Speed’ lot makes a fortune or goes down swinging, here’s a comprehensive review of Apple’s 32GB iPhone 3GS.

Many might call Apple iPhone 3GS as the ‘same tot in different clothes’ but for Jobs its all about ‘twice the performance’. In many ways, the 3GS is a mirror image of the iPhone 3G with no difference on its external framework but for some the latter may be a major upgrade from previous versions of the system software featuring highly sought after features like cut, copy, paste, stereo Bluetooth, MMS, tethering, video recording, and landscape keyboard (for more applications).

As soon as we unboxed the hyped smartphone the Apple iPhone 3GS quickly hopped onto our desks all wrapped in a highly statuesque chassis. Over a barrel to take the glance off it, the appearance was exactly what we’d expect from Apple’s chambers. The orthogonal box which dropped it in our assessment class carried along Apple earphones with a remote and mic, dock connector to USB cable, USB power adapter, and an important product information guide to help you set up your iPhone and use its key features. On holding it for the very first time, the 3GS feels commendably sleek and lightweight at 135g compared to the iPhone 2G. At 115.5mm x 62.1mm x 12.3mm, Apple has definitely jumped higher with such a compact enclosure but not as big as the leap from the first- to second-generation models. As aforesaid, visually there’s nothing strikingly different about the 3GS versus the 3G, save for the lettering on the back, which is now mirrored like the Apple logo. The use of an oleophobic surface which makes the surface less prone to fingerprints and easier to clean is quite an attractive feature planked in. Many may find the first iPhone aluminum surface in the back much better with fingerprints but we appreciate the new crafting as well.

But Apple iPhone 3GS could have been little distinct or lets say noticeably different. By different we don’t mean putting a shimmering logo behind or changing its shell. We still like the original groundwork. Of course, the device is not just a clone of the previous one and comes with significant changes creeping inside the phone. The front surface is ruled by a large screen to make your experience an immersive one, leaving just a little bit of space for the main menu button and a speaker on the top. The edges are graced by chrome (silver) metal to give it an elegant look and host a volume control button and a vibration mode button. While solely a camera on the rear side bobs up as sufficient enough to grace the back. 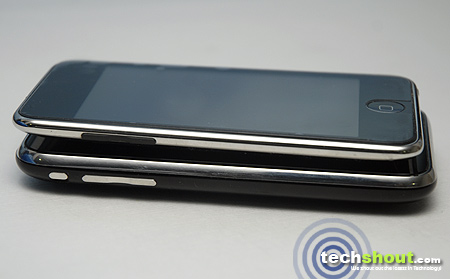 Similar to its previous kin, it features the same main menu interface with super fluid swiping and scrolling. What about its touchscreen? Well, Jobs knows his job best there. Though no cosmetic changes to the device, the whole truth lies behind the wall. A 3.5-inch display with a resolution of 480 x 320 is technically identical to its predecessor’s screen but the coating of oleophobic puts it slightly higher. Wiping it almost completely clean with a single swipe wasn’t exactly the most pressing issue we had with the phone, but it’s nice to know that Apple is innovating with its widescreen space. A camera tweak is definitely a big treat for iPhone fans, after all the suffering through not having one, then on two iterations with a paltry 2 megapixel camera, no auto-focus and no flash. We could capture our moments pretty clearly with its 3.2MP auto-focus camera and options like emailing photo and MMS made it easier for sharing. If anyone likes a particular ‘seized’ picture and wants to look at it over and over, the option to use it as wallpaper makes it possible to do so. Unfortunately, Apple didn’t plunk down any attractive options under ‘camera’ this time as well. We were quite chapfallen with features like cropping, geo-tagging, fun frames, and clicking photos in black and white or sepia tones going amiss. The enhanced built-in moment-capturer brought in praiseworthy clarity. Here again Apple continues to rely on its onscreen trigger instead of fixating a physical button to take pictures. The video recording functionality was also a seamless experience. However, an option to redouble the brightness level for phenomenally clear videos would be appreciated.

Before anyone could start guesstimating the reason behind hitching ‘S’ just next to 3G, Apple defined the signpost as ‘Speed’. Definitely, the later one revolves more around the speed it offers for multimedia enthusiasts. We found the handset running up to two times faster than what Apple has offered us so far. Due to the integration of improved hardware, a faster 600MHz CPU and double the RAM at 256MB, the phone was spotted running smoothly and speedily. We enjoyed executing our important tasks expeditiously and could sense it right from the homescreen.

Paying a visit to the Apple Store was something we yearned for from the moment we unboxed the dainty device. We could barely stack off from learning about MapHook, a location-based journal and social networking application. Options to search, rate top 25, check on updates, and view apps by various categories further made our sojourn at App Store fun-filled. Except a wider view displayed of the iTunes profile when we connect it via a USB cord, we didn’t find any difference in swinging by the store without connecting it. Browsing also made a good impact on us. Watching Black Eyed Peas Concert in South Africa FIFA 2010 on YouTube was pure fun with clear sound and great visuals. There’s no reason why we shouldn’t applaud its faster browsing. From Troublemaker song to getting tips on ‘seven things to never do on Facebook’, accessing everything came smooth to us. 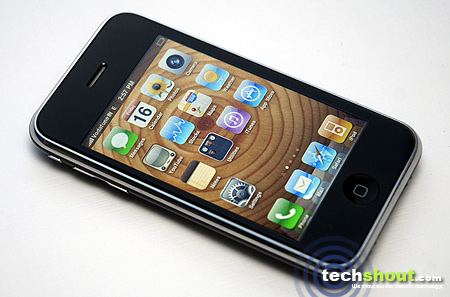 Although the voice quality was decent, the iPhone 3GS shouldn’t have minded improving on calling quality as well. Like its predecessors, messaging on a virtual touchscreen QWERTY keypad, marking important days in calendars, making general notes, keeping a tab on stocks trend, or taking help from pre-loaded maps remain the same. One noticeable factor discovered only in the 3GS is the addition of Voice Control and the copy/paste facility. Calling contacts, playing music by just using our own voice and detecting voice commands was a new experience. The addition of Spotlight to the iPhone OS was another notable aspect. Apple’s this tweak gives you homescreen access to almost all your content on the phone.

Apple has yet again done a great job for all those audiophiles around the world. The music quality (with headphones) is good enough to keep you engrossed for long hours. Talking advantage of the touch functionality, we couldn’t resist our gaming passion and quickly snapped onto SF IV, X Invasion 2 and The Hero. Utilities looked even more useful with a proper compass inside. Navigating a new city with your iPhone 3GS has been made easier with the inclusion of a hardware compass. The analysis was perked up even more with the integration of a landscape keyboard. Accessing to the more spacious layout in Mail, Notes, Messages, etc, will be appreciated by almost all. The battery life of the Apple iPhone 3GS didn’t look anywhere different from the 3G model. The count is exactly the same of about five hours.

Apple continues to offer the best touchscreen experience. From swiping to scrolling, we luxuriated in a phenomenally fluid journey.

We could browse faster and download applications with minimal amount of time.

The enhanced utilities are worth a mention.

Voice clarity could have been better.

Features like photo tagging, cropping, photo feeding, and geo-tagging are not included in the camera.

Uniqueness added to its design would have been appreciated. Except some sleekness to the body, the layout of the handset still remains the same.

It still lacks the multi-tasking capability.

To wrap up, the Apple iPhone 3GS defines multimedia features at its best and sure enough puts other manufacturers under nerves. With many appealing features in a more compact chassis, the smartphone does justice to the price tag attached to it. Minus a few stitches in the camera quality, voice calling functionality and design, it’s a great choice for anyone who wants a touchscreen device with commendable features. The 32GB unit we received carries a price tag of around 40,000.

The device managed to impress us and gets a rating of 9 out of 10.