Apple iPhone 3G announced, to be available in 70 countries 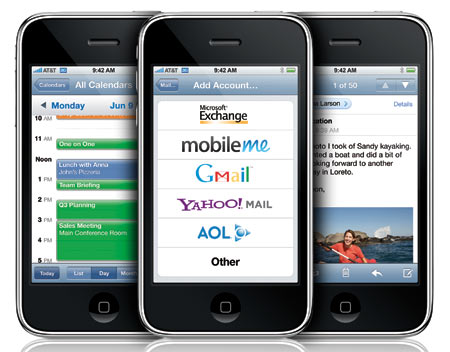 iPhone 3G has been finally announced. Putting a full stop to all the rumors and speculations, Steve Jobs unveiled the next generation iPhone at the keynote presentation at WWDC. What is more interesting is this time the iPhone will not only hit the US market but will also be available in 70 other countries including India.

Further, iPhone 3G features faster access to the Internet and email over cellular network with quad-band GSM and tri-band HSDPA for voice and data connectivity around the world. Moreover it supports Wi-Fi, 3G and EDGE networks and automatically switches between them ensuring fastest possible speed.

The next generation iPhone will make multi-tasking easier than before. Apple claims that with iPhone 3G, users can simultaneously browse the web, get map directions, or check the email while the user is on a call.

Apple iPhone 3G will be available in the US on July 11. The 8 GB model will carry the price tag of $199 while the 16 GB is priced at $299. Apart from the US, iPhone 3G will also be available in 21 other countries such as Australia, Austria, Belgium, Canada, Denmark, Finland, France, Germany, Hong Kong, Ireland, Italy, Japan, Mexico, Netherlands, New Zealand, Norway, Portugal, Spain, Sweden, Switzerland and UK on July 11, while it would hit the rest of the countries across the globe later this year.