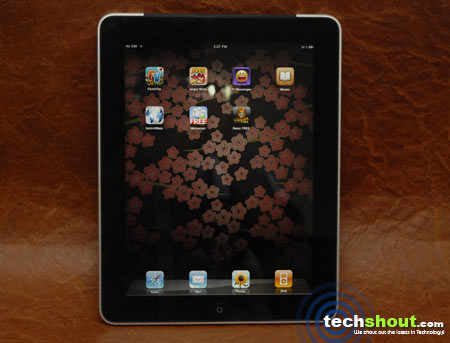 We’re just going to dive into our review of the Apple iPad without beating about the bush. We mean, does the Apple iPad need any introduction? Unless you’ve been hiding under a rock or living on the moon, we’d wager our best tie that you’ve come across an indecently large number of headlines on the tablet. It’s a cliched line, but the iPad does look quite like a giant iPod. The aluminum panel on the back is bare of anything but the Apple logo and curves gently towards the edges to allow you to cradle it in one arm easily if you’re not the kind to hold it by the bezel while using the slate. So although the bezel may appear unduly generous at a glance, it’s got a reason to be less than trim. On the left edge sits the SIM card slot, while the right side hosts the volume rockers and dedicated key for muting sounds. The top is shared by a locking or on/off mechanism and 3.5mm earphone jack.

The audio jack has been placed thoughtfully on the top considering the fact that most people will probably be using this sleek gizmo as a mobile entertainment source more than anything else while holding it in landscape mode. More on why we can’t call it a useful productivity tool later. And the last port is the dock connector which is positioned on the base besides the in-built speaker outlets. Talking about its audio support, the speakers are no substitute for the 3.5mm earphone jack since they don’t carry off the entire sound spectrum graciously. They seem to be more of an afterthought that Apple pitifully did not spare for a FaceTime camera.

The overall look is uncluttered and Apple’s possibly betting that this exterior is the look of the future. It probably is. But the tablet’s stark design also highlights its touchscreen. If asked to name another gizmo with one button as the only form of interaction apart from the touchscreen, we probably wouldn’t be able to come up with a reply. Since gadgets seem to be getting thinner by the day, we can literally picture everything behind the screen shrinking away until iPad version 10 is naught but a semi-transparent rollable display. You may be able to disagree with the statement in future, but for the present, there’s nothing like an Apple product to exemplify touchscreens. 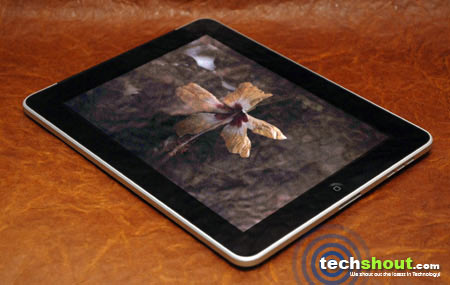 The 9.7” LED backlit multi-touch display was very attentive to every command issued from our fingertips. We haven’t the heart to try a drop test on something so beautiful, so we can’t tell you if the screen is going to be just as yielding after a couple of drops. It’s like this with Apple – if there’s a gadget you’re doubtful about wanting to pay for because of the touch display, the Apple branding invokes the exactly opposite feeling. The IPS-enhanced screen is visible in most kinds of lighting conditions and the attractively bright display does not eat up on the battery as much as we expected it to. According to our reckoning, the iPad is good to go on a single charge for around ten hours of average use with Wi-Fi turned on.

When Apple decided to wedge their slate between the smartphone and netbook category, it was probably because they weren’t sure of its exact nature themselves. Take the productivity capabilities for one. It gets really frustrating when that .txt document you need can’t be downloaded through Gmail, something we take for granted on most smartphones. On the other hand, you can make hard copies of mail attachments or pictures by simply pressing the print option, provided there’s a compliant printer standing by. This tablet has its own alien way of dealing with mails and you’ll just have to be content with it. Of course, some third-party apps like ReaddleDocs for one ought to do the trick in this case. Grabbing the accuracy of technical descriptions by its ankle, the Apple iPad can’t actually be called a true blue multi-tasker. Sure you can keep songs within the iPod app going while browsing the web or doing something else, but multi-tasking toes a lot of lines whichever direction you take it.

The Apple iPad is weighed down by its 1.5 pound load after some time spent cradling it or holding it by the bezel. So find a good place to plop down the slate when you want to use it for an extended amount of time like we did. Hitting out messages on the virtual keyboard is a comfortable enough experience whether executed with both hands or just one. As for the web browsing experience, where shall we start? No Flash support means that you’re privileged enough to surf sites without being bothered by those annoying ads. But Apple’s refusal to support the standard also leaves gaping holes in websites which contain a lot of Flash content. No matter how much it may get buried under all the gushing about design and functionality, this facet can cause some major pain to regular users. 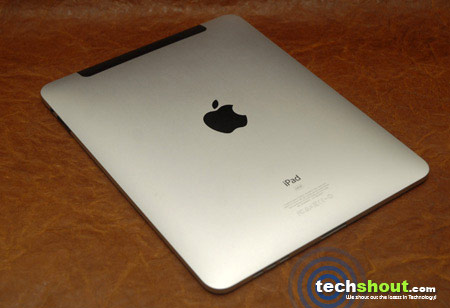 On the other hand, this Apple device is quite splendid as an entertainment offering. It plays out AAC, protected AAC, Apple Lossless, MP3, WAV and other files very clearly through a pair of earphones. Movies and video clips are reeled without glitches while being supported by the excellent audio quality and somehow when you get down to doing this, it seems to be the only reason for the Apple iPad ever existing. We’ve been curious about whether this Apple offering can outdo eBook readers right from when the company decided to sturdily back it with the iBook store. Manufacturers may have been taking a swipe at the slate for sporting an LCD screen and poor battery life, both of which are questionable as compared to eBook readers. But when you get down to the real thing, the iPad serves as a striking eBook reader. Your eyes don’t know they’re being strained more than they would have been on an eInk display because they’re too busy taking in the brilliance.

One thing you’ve got to keep in mind when people say that they love this Apple i-so and so is the iTunes Store. There isn’t much you can do with the iPad without actually visiting the online store for anything from games to productivity apps. There’s probably a proper difference when an iPhone or iPod app is cited as compatible with iPad and optimized for the same. The Yahoo! Messenger app looked pretty pixelated on the large screen estate, while Farmville, which happens to be available in HD suits its purpose well. For racing fans, the slate is a slice of heaven with the in-built motion sensors and other props. We managed to surface out of Asphalt 5 HD only to find ourselves slinging some feathered balls of fury at the green pigs in Angry Birds for a very long time.

With the smooth aluminium back panel and screen which simply jumps at you, the iPad is gorgeous to behold.

The display and 1GHz A4 processor work to offer a very responsive touchscreen experience and it froze up on us just twice during the whole test run.

The battery life of around ten hours is great for all the web browsing, gaming and multimedia entertainment we got out of it.

The lack of Flash support is something that will bother a lot of users when they come up against the unsatisfactory web experience. No matter how hurriedly Apple may try to usher in the HTML5 era, it hasn’t arrived in full glory as yet.

A FaceTime camera and USB port for transferring files are two other elements that are seriously lacking in the iPad.

We can’t really tell you if the Apple iPad is worth buying considering the Rs. 44,900 you have to shell out for the 64GB Wi-Fi + 3G version like the one we reviewed, or Rs. 34,900 and Rs. 39,900 for the 16GB and 32GB Wi-Fi + 3G variants, respectively. If plain Wi-Fi is a good enough flavor, you can even grab the 16GB model for Rs. 27,900. Apple can only be expected to make it better and better. So a part of the proceeds contributes towards enhancing the technology which is already quite remarkable. Think of it this way – there will always be a better phone, notebook or TV in the future. But are you really going to do without any of these just because patience is said to bear sweeter fruit? Taking the Apple iPad tablet’s overall functionality and design into calculation, we’re giving it an 8.8 out of 10 rating.