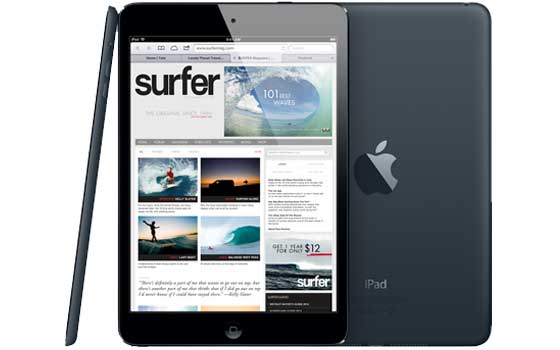 A new report has stated that the iPad mini 2 with a Retina display will not be entertaining us with its presence before the onset of next year. A post on China’s Economic Daily News stated that the compact tablet by Apple was apparently fated to be launched during the fourth quarter of 2013, but this just might not happen anymore.

According to the grapevine, the iPad mini 2 has been crafted with the Retina display that trudges in the footsteps of the screen seen on the iPhone as well as 9.7-inch tablet and adopts a double resolution method. So says an Apple Insider report which goes on to elaborate that the device’s 7.9-inch touch panel will also be crammed with 3.1 million pixels, despite the smaller size.

Found in the same article speaking about the iPad mini are details revolving around the fifth generation 9.7-inch tablet. It seems that the next iteration of the full-sized slate is due to arrive sometime towards the end of the third quarter – September, if we had to spell it out. Having covered the iPad mini 2 and its enlarged sibling, let’s move on to the upcoming smartphones.

Not only was the purported iPhone 5S recently spotted in leaked images, but certain sources have also managed to render a full view of its insides. As for the budget handset, there have been no spills so far. But a peripheral manufacturer named Techdy has built an Android device, claiming to have taken inspiration from the wallet-friendly Apple gadget’s design.

With basically no official word to back this news, we guess it’s all right to still hope for an October release for the iPad mini 2.